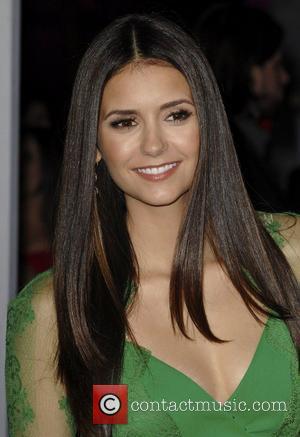 Nina Dobrev and the rest of 'The Vampire Diaries' cast are enjoying quite the bump in profile at the moment; the third season of the show returned in January after a mid-season break and continues to grow in popularity, perhaps in part due to the phenomenal success of the last 'Twilight' film, paving the way for more tales of the supernatural to find mainstream success. Dobrev was recently on the cover of Nylon magazine and was sounding optimistic for the future in the wake of her role playing Elena in the popular CW aired show.

Discussing potential future roles, the Bulgarian-Canadian actress admitted she had an eye on breaking into the film industry, claiming "I want to become a different person, and that's what working in film allows. I want to be a punk or a sweetheart or a drug addict! There are so many things to explore." Dobrev went on to admit that sometimes she felt restricted by the pre-conceptions of others, stating "Sometimes they'll be like, 'She's not plain enough.' Or 'She's not edgy enough.' That frustrates me. I feel like a blank canvas, and I wish people would be a little more open-minded."

Whilst Dobrev is thinking of life outside 'The Vampire Diaries,' her co-star Kat Graham is already taking decisive action, with the actress explaining in a self-posted Youtube video that she was turning her attention to music, revealing that she'd signed a record deal with A&M Octone Records. "I am so, so excited to share my big special announcement with you guys first. I am in a recording studio, which is why... I've been a little quiet," she started, adding "The reason is I am now signed to A&M Octone Records. It is my first time being signed to a major label. We have a single and the new song that you guys will be hearing is called 'Put Your Graffiti on Me'. We are shooting a music video this weekend." Things are looking up for 'The Vampire Diaries' girls.