Nina Dobrev Paid Farewell To The Vampire Diaries As She Won Her Final Teen Choice Award For The Show On Sunday (16aug15). 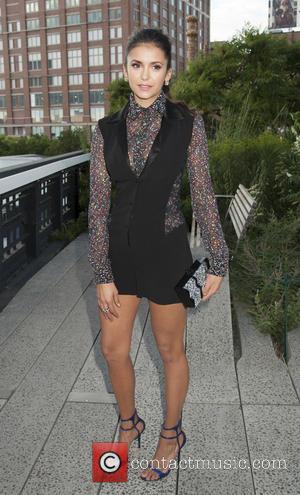 The actress was named the Choice TV Actress: Sci-Fi/Fantasy for her portrayal of vampire Elena, a role she has been playing for the past six years.

However, Dobrev is leaving the programme this year (15), and she took the time to say goodbye to her fans and castmates during her acceptance speech at the Los Angeles prizegiving.

Dobrev approached the microphone with fake fangs in her mouth, and after she removed them, she said, "That's right I don't need these anymore... The last two months have been a pretty big change for me. Change - it's a scary word. Or at least, I used to think that. Because it meant new beginnings. New beginnings for a future that was unknown. But change is necessary. Necessary for you to grow and learn and to better yourself, because everything in life comes to an end.

"And as this chapter of my life comes to an end, I look back on it with a grateful heart and I smile. Just like my character Elena, I started this show as a young girl... and together we've grown up. Over the last six years, we've become women. These were six incredible years I've had the pleasure of spending with all of you guys (fans). I - we - wouldn't be here without you guys. Thank you for coming along with me on this amazing journey. Remember change is coming, so hold on and enjoy the ride - it's gonna be fun."

The Vampire Diaries was also awarded Choice TV Show: Sci-fi/Fantasy and Choice TV: Liplock for an onscreen smooch between Dobrev and her real life ex-boyfriend, Ian Somerhalder, who was not present at the ceremony.