Nile Rodgers Surprised Londoners On Monday Morning (22jun15) By Playing A Impromptu Set On The Street. 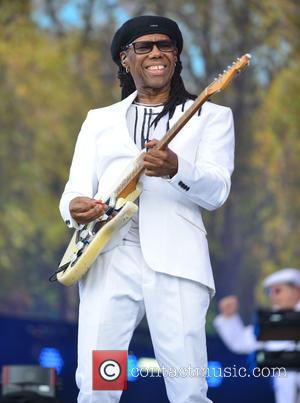 The Chic frontman, who was in the U.K. capital to perform at the British Summer Time Festival on Sunday (21Jun15), wrapped up in a coat, scarf and woolly hat to sing and play electric guitar on London's Southbank thoroughfare.

He managed to go incognito by playing bossa nova music, but he was soon recognised when he started performing Chic songs.

Rodgers writes in a post on Twitter.com, "Today I went busking on the London Southbank. Didn't draw much of a crowd until I started playing dance music. Hmm?... Though I had no voice from screaming during last night's show, I started to draw a crowd when I sang 'Aw Freak Out!'"

Rodgers, who began his music career busking, staged the street show to mark the relaunch of Britain's Sky Arts TV channel. According to reports, he made more than $19 (£12) in donations from onlookers.