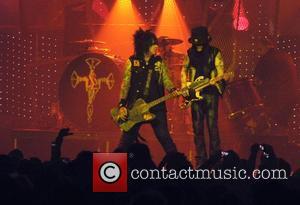 Motley Crue rocker Nikki Sixx cleared the way for a joint tour with Poison by apologising to BRET MICHAELS for derogatory comments they made about the idea.
Poison frontman Michaels first suggested hitting the road with Motley Crue, but the concept was dismissed and scoffed at by some members of the rival rock group.
The two bands later stunned fans by announcing the joint tour and scheduling the dates for this summer (11), and Michaels admits the plan was put into action after Crue star Sixx approached him and apologised for their previous remarks.
Michaels tells The Arizona Republic, "There was a lot of controversy between Motley Crue and Poison, just some comments they had made about how 'We're not gonna do that kind of tour'. I had said something on stage, like 'Wouldn't it be awesome if for Poison's 25th Anniversary and Motley Crue's 30th, for there to be a tour we did together?' And a couple of the members of their band made some pretty derogatory comments.
"I just said, 'The hell with it. I'm gonna do my own tour.' Then, Nikki (Sixx) said, 'I'm really sorry about some of the comments some of the members made. I really want to do this'. So I think it's gonna be a great tour."