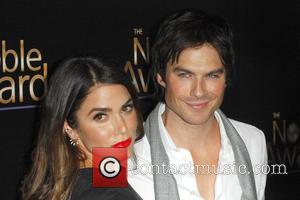 Actress Nikki Reed testified in the California State Capitol on Tuesday (03Mar15) and helped pass a bill for animal rights.

The outspoken animal activist paid a visit to Sacramento to testify on behalf of Assembly Bill 147, which gives cats and dogs the opportunity to be adopted after they have been used in scientific testing.

Prior to speaking to members of the State Assembly, the Twilight star took to Instagram.com to urge her followers to back the bill, writing, "Heading to The State Capitol to testify for #Ab147 - animals used for science should not be discarded - the cruelty that they endure being used for research purposes is harsh enough - let's not further the abuse by claiming that rescues are not equipped to help them live out the rest of their lives peacefully.

"I need you guys! We have one hour before the hearing. Please call and encourage Assembly members... to support this legislation. Yes to Ab147 supporting the right for cats and dogs to be adopted after they've been tested on."

Reed even shared a snap of herself in front of the Capitol with a pet Beagle, adding, "I'm wiith Emma, a survivor from a San Francisco testing facility. The holes in her ears are a testament to the horror she endured."

The bill eventually passed, and Reed later shared the good news with her followers: "We did it! Higher Ed passed #Ab147!!!... What a long day, a beautiful day, a day that has left me with a fire burning inside my soul- round two is next- Senate, here we come!

"The fight isn't over, but thanks to all of you - the thousands of you that called in earlier - we cleared the first hurdle. I love you guys. Truly."

Reed's actor fiance and fellow animal lover Iam Somerhalder praised his bride-to-be's activism in a post on his own Instagram page, writing, "Wishing I could be there to support @iamnikkireed and the bill she is testifying in favour of. I am hoping we bring awareness to an issue that most don't know anything about. Testing on beagles for research purposes and then simply discarding them is nothing short of inhumane. Let's shine a light on the truth behind how we come to deem products acceptable for human use."