Gabriel Stebbings - the Urban Heat Island moniker remains unexplained - left Metronomy in 2009, smack bang between their awkward but evolutionary second album Nights Out and before their quixotic third, The English Riviera, turned frontman Joe Mount into a household name (Provided of course that the house in question read The Guardian). 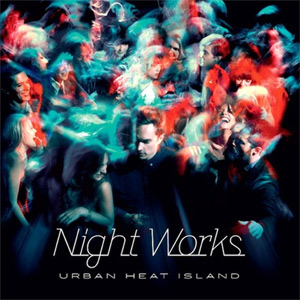 Probably now relieved he doesn't have to take the risk of performing live with a plugged-in Wickes lightshade stuck to his chest, his first outing as a solo artist - we'll let him off contributing bass on one track of Nicola Roberts Cinderella's Eyes album - is definitely one for connoisseurs of left field pop. It might be churlish to point out that this is exactly where Metronomy themselves hang out on the musical map, but there's room for everyone there, and given that 98% of all contemporary music now seems to be derived from the same three or four elements, it's exhilarating to find an artist willing to throw everything in the air just to see how it lands.

Night Works comes accompanied by lots of blurb about being set "In the milky, pre-dawn hours", the soundtrack to a party with "The damned partying through the apocalypse". Blimey. The reality you'll be relieved to know is more serene, Stebbings leafing instead back through the last 30 years of speccy British campus rock on the gorgeous Nathaniel, a dead ringer for anything on Prefab Sprout's na

Whilst it's occasionally nice to hear the awkwardness of eighties Albion again, Night Works still occasionally misses: Arp has all the twittery choral yearnings of Everything Everything, but none of their bombastic post punk time signatures, whilst underneath the Afro-pop superficiality of Riches things stray far too close to hackneyed indie landfill. Perversely, it's a record at its most absorbing when not trying to be too clever, as the albino funk of Share The Weather - complete with an incongruous, tongue in cheek sounding rap - ups the tempo in style, whilst the signature moment Long Forgotten Boy has all the urgency of a man who realises his work is nearly completed and needs it get somewhere other than the local Post Office.

What Night Works does clear up it seems is the identity of whom was trying to keep Metronomy a niche proposition, a conclusion easy to draw on although there's a cigarette paper between the two parties and neither deserves anything other than a prominent place on the sideboard. It also proves that Gabriel Stebbings still has the mainstream in his sights, but at the moment has neither the will nor the know-how to jump the tracks. It's a good start though, and his Post Office is certainly one we hope won't be shut down any time soon.