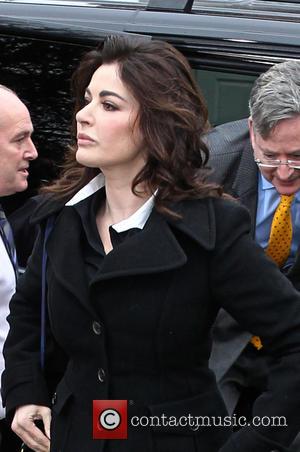 Picture: Nigella Lawson - Nigella Lawson arrives at Isleworth Crown Court to give evidence in the trial of the her ex-employees, Francesca and Elizabetta Grillo...

The British cook, famed for her wholesome image, was hauled into a London court on Wednesday (04Dec13) to testify at the fraud trial of two former members of her staff.

The women are accused of using Lawson's credit card without permission, and the court was told of an explosive email from her ex-husband Charles Saatchi alleging she could not keep track of the pair's behaviour because she was "off your head on drugs".

Lawson told the court Saatchi has waged a smear campaign against her since their marriage broke down when he was photographed with his hands around her neck at a restaurant earlier this year (13).

She denied his allegations that she had used cocaine habitually for 10 years throughout their marriage, but under questioning the chef admitted she had taken the drug on around six occasions when her first husband John Diamond was being treated for terminal cancer in 2001.

She also admitted taking the drug once in 2010 when a friend offered it to her as she was depressed about problems in her marriage to Saatchi.

Lawson told Isleworth Crown Court in London, "As a witness here, I have got no legal protection, but I can tell you my Gp (personal doctor) has given permission to say that the idea that I am a drug addict or a habitual user of cocaine is ridiculous. I do not have a drug problem - I have a life problem."

Francesca and Elisabetta Grillo deny defrauding Lawson and Saatchi of $1.02 million (£685,000) by using their credit cards for personal gain.