Nicole Scherzinger is ''pleased'' for new 'x factor' judges Demi Lovato and Britney Spears, and wishes her replacements luck with the show. 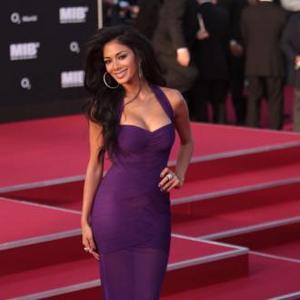 The 33-year-old singer was axed from the panel of the US show alongside Paula Abdul after just one series, but she insists she has no grudges towards her replacements on the talent-search contest.

Speaking at the UK premiere of 'Men In Black 3' in London's Leicester Square this evening (16.05.12), she told BANG Showbiz: ''I'm so pleased for them both and I wish them all the best on the show.''

Nicole was accompanied to the premiere by her boyfriend Lewis Hamilton, and the motor racing star said he was ''very proud'' of the singer, who plays Lily Poison in the film.

He said: ''I'm so proud of Nicole, she has worked so hard in her career and it was great to go and see her in action.

''I'm just really proud and looking forward to seeing her in more films.''

Joining Nicole at the premiere were her co-stars Will Smith - who was spotted rapping with British duo Rizzle Kicks on the blue carpet - Emma Thompson, Alice Eve and Josh Brolin.

Rapper Jay-Z was a surprise late arrival to the event.