Nicole Scherzinger and Lewis Hamilton have denied reports that they are engaged and are reportedly just enjoying getting to know each other again after their split last year. 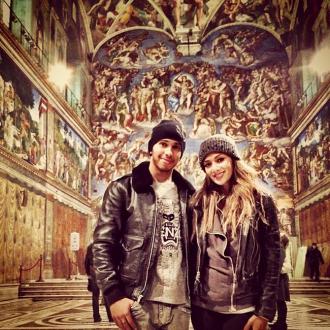 Nicole Scherzinger and Lewis Hamilton are getting to know each other again.

The 35-year-old singer and the 29-year-old Formula One star have been dating on and off since 2006 and although they appeared to have split for good last year, rumours emerged last week that the pair had got engaged after Lewis posted a picture of them on Instagram and referred to Nicole as ''wifey'' in the caption.

However, though Lewis has insisted they haven't got engaged, insiders say the couple's relationship is very much back on.

A source told The Sun newspaper: ''There's always speculation and they are very committed to one another but they have only been back together since Christmas.

''They want to spend time getting to know each other again without having to worry about wedding bells.''

The couple's relationship has failed in the past as they've struggled to juggle their work commitments with spending time with one another, but as Nicole has decided to step down from her position as a judge on 'The X Factor' she could have more time to visit the racer as he competes in Grand Prix across the world.

Lewis has also revealed that his relationship with his father, Anthony Hamilton, is back on track after falling out with one another following the race car driver's decision to drop him as his manager in 2010.

Speaking at the Australian Grand Prix in Melbourne yesterday (17.03.14), he said: ''There are no problems between us now, he even goes to some of my races and always supports me ... My dad is my dad and we have a normal dad-and-son relationship.''