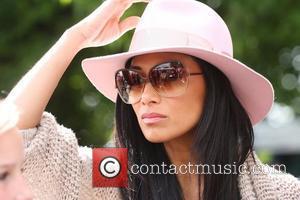 Nicole Scherzinger's on/off boyfriend Lewis Hamilton has denied cheating on the former Pussycat Dolls star after he was pictured allegedly kissing a mystery woman.
British racing driver Hamilton partied in London with friends this week (begs09Jul12) and appeared to lock lips with a fellow reveller, but he insists he was simply giving his rapper friend Phreeda Sharp a friendly kiss goodbye.
In a post on his Twitter.com page, the Formula 1 racer writes, "Phreeda is like my sister, a good mate to me (and) Nicole. Can't say goodbye 2 (sic) friends without it being seen as a mystery kiss. Next time may have 2 shake hands!! Madness!"
In a separate message, Sharp adds, "I am not dating Lewis Hamilton. He is like my brother."