Vinny Guadagnino says his 'Jersey Shore' co-star Snooki's pregnancy symptoms were no different to when she was hungover. 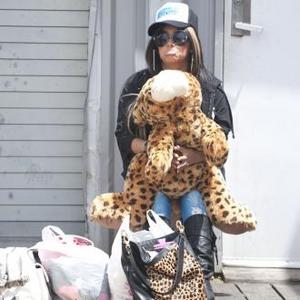 Snooki's 'Jersey Shore' co-star says her pregnancy symptoms were the exact same as when she used to get hungover.

The reality TV star - whose first son Lorenzo was born last month - gave up partying and alcohol throughout her pregnancy but Vinny Guadagnino says she didn't act any differently.

He told MTV: ''It was pretty much the same, because when she drank, she would pretty much sleep all day anyway. Nothing really changed. She had the same exact symptoms when she's pregnant than when she was hung over, so nothing changed at all.''

Vinny also believes pregnancy made Snooki - real name Nicole Polizzi - ''normal'' because she was easier to have a conversation with when she was sober.

He said: ''It was just chill, calm, cool, healthy, changed her life. Why I like this season of 'Jersey Shore' was because you could actually speak to her. ... She was actually normal.''

However, Vinny admitted he was unprepared for how to deal with a pregnant woman and had to get tips from his mother.

He said: ''I didn't know what it was like to live with a pregnant woman, so I didn't know if every day you were waking up to someone screaming 'Get me this, get me that'. My mom was like, 'Vinny, you better be prepared to put her feet up every two seconds,' but she was the best of all.''