Snooki has revealed she would love to have a gay little boy one day because she is such a big supporter of the gay community. 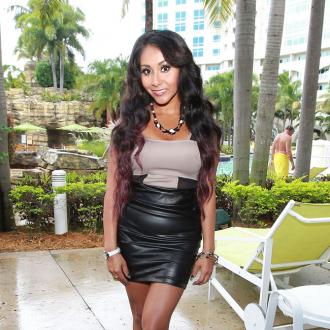 Snooki wants her son to be gay.

The former 'Jersey Shore' star - who has a 10-month-old son Lorenzo with her fiance Jionni LaValle - revealed she is praying that she has a ''gay little boy'' one day and wants to be a better role model.

The 25-year-old reality TV star, whose real name is Nicole Polizzi, joined her former co-star Jenni 'JWoww' Farley to speak out in support of the LGBT (Lesbian, Gay, Bisexual and Transgender) community, at an event hosted by The Trevor Project, an organisation dedicated to the prevention of suicide in LGBT youth, on Monday (17.06.13) night.

She said: ''Me and Jenni weren't exactly the best role models. But now that I'm a mom, I'm so grateful for The Trevor Project to support the LGBT youth so they have someone there for them because I'm praying I have a gay little boy one day.''

Snooki also said that motherhood has completely changed her instincts and lifestyle.

According to the New York Daily News, JWoww added: ''We're huge supporters of the LGBT community so we would do anything to help them and protect them. We feel like moms when it comes to our gays -- we really do.''