'Jersey Store' star Snooki has been pictured wearing her engagement ring for the first time while out walking her dog. 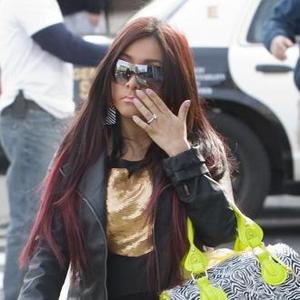 Snooki has been pictured wearing her engagement ring.

The 'Jersey Store' star - real name Nicole Polizzi - showed off the huge diamond band while out walking her dog yesterday (05.03.12) in Jersey City, confirming reports her boyfriend Jionni LaVille has proposed to her.

In addition to now making wedding plans, the couple are also expecting their first baby together, and she is going to star in an MTV spin-off of the show which made her famous.

A source said: ''She is pregnant and has only told her closest friends and some family. She's been telling people that she has a big announcement coming.

''They are having to redo the creative direction of her spin-off because of her pregnancy.''

Recently Snooki - who rose to fame for her excessive partying and drinking - revealed she was expecting a proposal from Jionni at some point in the near future.

She said: ''I know he's the one so I know The Ring's gonna come soon. Well, not soon-soon. He knows it should be big, because if it's small I'm saying no. Like, 'Get another ring!' ''