Snooki Moves Out Of The Jersey Shore House 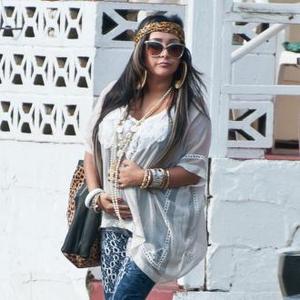 Snooki has moved out of the 'Jersey Shore' house because she doesn't want to be surrounded by parties.

The pregnant star - who is engaged to Jionni LaValle - is living in an adjacent house as she was worried about what people would think of her if she stayed, but show chiefs believe her change of address will provide new themes for the programme to explore.

Chris Linn, MTV's executive Vice President of programming and head of production, told Entertainment Weekly: ''It's not a prison. I know she's concerned about the perception of her being a pregnant woman in a party house.

''I think that's a Common experience among a group of friends when somebody gets pregnant. This is an opportunity to see how she deals with it and how the rest of the house deals with it. The show has always been about following what's really happening in their lives.''

However, he reassured that fans shouldn't worry about Snooki losing her humour now she is readying for a more sensible path in her life.

He said: ''I don't think anybody expected Snooki to be the one to blaze that trail, but she is, and it's going to change the dynamic with everybody else.

But with Mike returning to the show sober after battling prescription drug and alcohol addiction and 24-year-old Snooki due to give birth to a baby boy in September, the focus of the series will be different this time around.

Chris commented: ''They're starting to take those next Steps into adulthood. What's going to be different this season is how much their lives had changed.''