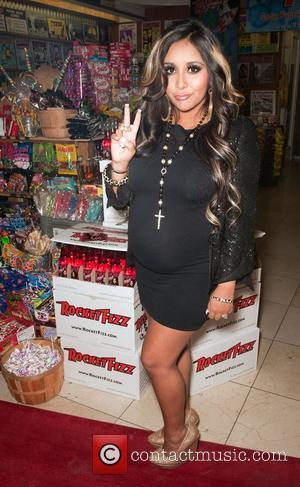 Nicole Polizzi, or 'Snooki' as she's known, has introduced the world to her baby boy, reports People Magazine.
The Jersey Shore star took a break from filming the second season of her MTV spin-off Snooki & Jwoww to show off Lorenzo, her newly born. "It's a different kind of love that I never felt before," says Polizzi, 24, who, alongside her husband, explained how choosing a name for her first son was much easier than giving birth, naturally: "We were going back and forth, and I just happened to think of Lorenzo," says LaValle, 25. "She loved it." The name, he revealed, was inspired by a child he knew from his hometown, where the happy couple now live. Following the death of her uncle, baby Lorenzo was honoured with his name, Dominic. "I did it for my dad," she explained.
Polizzi has a staunch reputation for having fun until the early hours of the morning, something that got her plenty of attention in the early seasons of Jersey shore, but the new mum has vowed to change her ways in order to look after her baby. "When I got pregnant, everything changed," she confirmed. "The partying is long gone. I'm a new person." Whilst enjoying her newfound, low-key lifestyle, Snooki still found time to show off the joys of motherhood via twitter: "Lorenzo is even cuter today. #imsolucky" said one of her tweets, as she answered questions from mothers to be and generally showed off her own bundle of joy.