Nicole Kidman and Keith Urban's daughters Sunday Rose and Faith Margaret have a ''mix'' of Australia and Southern accents. 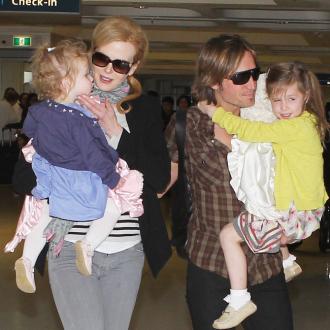 Nicole Kidman's daughters have a ''mix'' of Australian and Southern accents.

The 'Moulin Rouge' actress and her husband, fellow Australian Keith Urban, have two girls, Sunday Rose, four, and two-year-old Faith Margaret, and the children have picked up their parents' Aussie twang even though live in Tennessee.

Speaking on 'The Ellen Degeneres' show today (11.01.13), Nicole said: ''[Sunday and Faith] were both born in Nashville, and we live in Tennessee now.

''They have a mix of Australian and Southern [accents], which is really cute, but my mama always says, 'I can't understand her,' because ... she says, 'Hey, y'all!' to her grandparents.''

The flame-haired beauty - who also has daughter Isabella, 20, and 17-year-old son Connor with ex-husband Tom Cruise - describes Keith, 45, as a ''divine'' father to their daughters and has revealed his musical talents create a happy atmosphere in their home.

She added: ''The great thing about being married to a musician ... is you have music in the house all the time. There is something very joyful about having music. Because Keith can play pretty much any instrument, he'll just play piano at 7am in the morning. Breakfast around the piano is very much a part of our life.''

Nicole, 45, can still recall the first time she and her husband met at the G'Day LA event in January 2005. However, she and Keith have different memories of their initial encounter.

She explained: ''We have different perspectives on it. I'm like, 'You didn't love me at first sight. You didn't notice me!' And he's like, 'Yes, I did, but I just didn't let on.' But we kind of met and then about four months later he called me. That's a long time. He said he had other things he had to take care of. Guys, right?''