Nicole Kidman Takes On Comedy Once Again With Anchorman 2 Cameo

The latest name to be added to the Anchorman cast is none other than the Stepford Wives star. 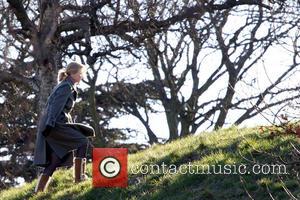 It’s official - Nicole Kidman has shot an uncredited cameo for the upcoming Will Ferrell flick Anchoman: The Legend Continues. Yep, you guessed it, that’s the sequel to the hilarious (imho) Anchorman. Kidman is adding her name to an already pretty impressive cast. Along with the original stars Will Ferrell, Steve Carell and Paul Rudd, Harrison Ford himself is going to make a brief appearance as well. Looks like Ron Burgundy’s crew is growing by the day. Can you imagine what that set must be like during filming? It’s no surprise Kidman would be eager to jump on this particular bandwagon.

This isn’t Kidman’s only dabble in the comedy world of late. In 2011, she shot a cameo in Adam Sandler’s Just Go With It. Apparently these kinds of lighthearted roles are simply in her blood. Hopefully you’re all excited for the Anchorman sequel and for Kidman’s appearance as well. The movie is currently still in production and the release date has been set for December 20th this year. That’ll certainly be one holiday flick to look out for.

And if you simply can’t wait that long for your next fix of Ron Burgundy, you can catch the teaser for Anchorman: The Legend Continues below.