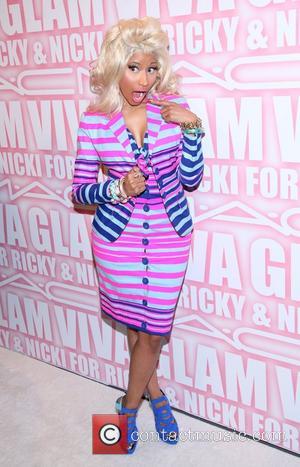 Nicki Minaj has become the latest celebrity to launch her own makeup range for Viva Glam MAC, along with singer Ricky Martin.
The Super Bass rapper wore a bright pink and blue dress with a matching jacket at the launch party, while Martin looked more subdued in a black suit. In a statement by Minaj, she said: When I was chosen by MAC cosmetics to be the next Viva Glam spokesperson, I wanted to hug everyone that worked at MAC for giving me this opportunity. I've always wanted to be a Viva Glam girl.'

The makeup range aims to help people of all ages who are affected by HIV / AIDS. According to their website: 'Every cent of the selling price of MAC Viva Glam lipstick and lipglass is donated to the MAC AIDS Fund.'

Martin also released a statement, saying: 'I am very honored to be chosen as the first Latin man to be a spokesperson for this beautiful cause. We want to talk about things that really matter, and obviously HIV/AIDS is one of those -- and in my case, HIV/AIDS and the cure for kids with HIV.'

While appearing on Good Morning America recently, Minaj spoke about the importance of stopping the spread of AIDS, as well as encouraging abstinence. She said: 'I have such a young fan base. I wanted them to start now protecting themselves. I want them to start now being smart. I want them to abstain first of all, that's the best decision that I can give them, because I love them so much and I don't want them to ruin their lives.'

Minaj performed at the Grammy's recently, turning heads in an extravagant red dress. Her performance of new single Roman Holiday also caused a stir, in which she performed an exorcism on herself.