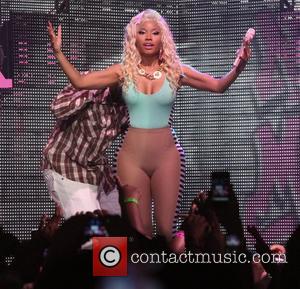 V Festival revellers hoping to see Nicki Minaj perform on Saturday and Sunday were left disappointment this weekend after the rapper cancelled her scheduled slot because of damage to her vocal cords.
In a statement to The Hollywood Reporter, Minaj's publicist said she "regretfully cancelled" her shows at the British festival "due to strained vocal cords". Her representative added, "Despite doctor's orders, she performed on a bruised vocal chord in (New York City) on August 14. As a result, the chord has gotten worse". Following an X-ray this week, Minaj was urged by a doctor to rest her voice for the next few days. On Tuesday (August 14, 2012), she had performed at New York's Roseland Ballroom, her first headlining performance in the Big Apple. As was widely reported, the show featured appearances from Drake, Foxy Brown and Lil Wayne. Minaj should have plenty of time to rest her voice should she join the new season of American Idol, as has been rumored lately. According to sources close to the Fox show, she is top of executives' list to become a new judge on the reality singing show, though the deal may be scuppered by a war between Coke and Pepsi. The rapper is the new face of the latter, though its huge rival Coke has been a long-time sponsor of Idol.
This weekend's V Festival lineup is headlined by The Stone Roses and The Killers, with Noel Gallagher's High Flying Birds and Snow Patrol also performing.