Barbershop: The Next Cut Nicki Minaj

Born in Trinidad and raised in Queens, 33-year-old pop sensation Nicki Minaj made her movie acting debut as Cameron Diaz's sassy assistant in The Other Woman.

Nicki Minaj is back on-screen in Barbershop: The Next Cut, the third in the comedy franchise starring Ice Cube and Cedric the Entertainer.

"We wanted a new face in the barbershop," says Ice Cube, who also produced the film. "We're unisex now, and have a beauty shop alongside the barbershop!" 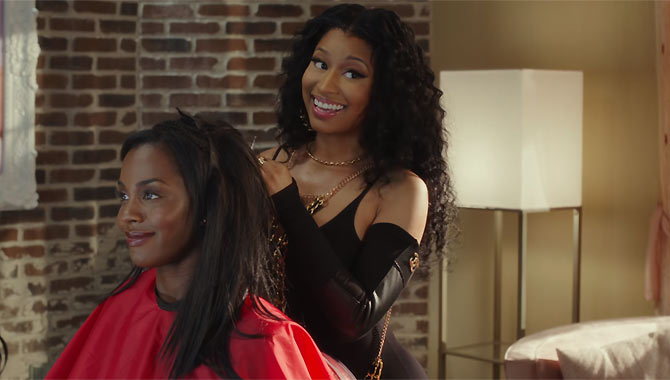 Nicki plays a hairdresser in the movie

And Minaj was honoured to be asked to join the cast. "I've looked up to Ice Cube my whole life," she says. "So when this came along, I was like, 'What? Of course I would!'"

Minaj loved the chance to work with top comedians like Cedric, Anthony Anderson and J.B Smoove. "It's so well cast and the script is so smart," she says. "It touches on everything going on right now socially in our culture, and on social media with us as young people. But it's also is just fun. And it's extremely funny."

Of the film's premise, Minaj says, "If you've seen the previous movies it's pretty similar," before catching herself and adding with a laugh, "but it's so different! It's set in a barbershop, and I do hair, which is insane. Could you imagine me doing weaves and stuff?"

Her character Draya is a bit of a sex kitten in the movie, but Minaj was determined to make her more than that. For example, she refused to do a scene in the script in which Draya twerks, arguing that "not every sexy woman is out here twerking all damn day!"

She continues, adding, "I wanted there to be a little bit of depth to Draya. I didn't want her just to be, you know, an Instagram thot [urban slang for a slut]. I wanted her to have some sort of purpose and meaning."

Watch the trailer for Barbershop: The Next Cut: