'Roman's Revenge' rapper Nicki Minaj believes she and Lady GaGa are both ''awkward'' and ''non-pretty''. 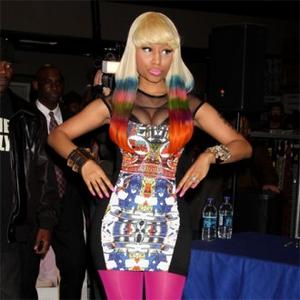 Nicki Minaj believes she and Lady GaGa are both "awkward" and "non-pretty".

The 'Roman's Revenge' rapper feels she and eccentric 'Poker Face' hitmaker Gaga have much in Common and that they both promote the idea that it is alright to be different.

She said: "We both do the awkward non-pretty thing. What we're saying - what I'm saying anyway - is that it's OK to be weird. Any maybe your weird is my normal. Who's to say? I think it's an attitude we both share."

Although she is famed for her fierce appearance and aggressive lyrics, Nicki admitted she was worried how her fans would react to her more vulnerable side, shown in MTV documentary 'Nicki Minaj: My Time is Now', which was being filmed at the same time as her late grandmother died last November.

She added: "I was afraid I'd been too real - that I'd shown too much of the actual person behind Nicki Minaj.

"Someone once told me, 'People love the facade of pop stars. It's not good to be a real person.' So I lost sleep over it. But then I met tons of people who said, 'I've become a fan of yours after watching that documentary.'

"I'm realising now that I'm never really going to know the rules. I just have to play."