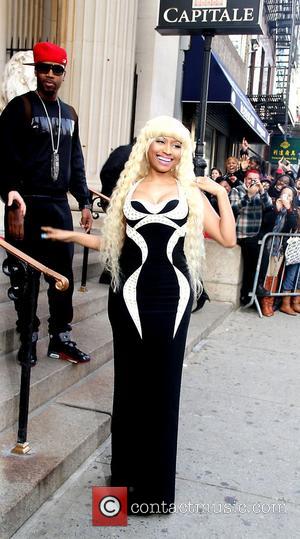 Nicki Minaj got an early birthday present on Wednesday (07Dec11) when Madonna kissed her on the lips on the set of their new music video.
The Material Girl met up with Minaj, who turns 29 on Thursday (08Dec11), to film the promo for their upcoming single, Give Me All Your Love.
The rapper took to her Twitter.com page to tell fans about working with her hero, writing, "Video shoot... In the presence of greatness. Madonna."
Minaj later tweeted a juicy secret from the shoot - moments after puckering up to Madonna.
She added, "Madonna jus (just) kissed me!!!!! On the lips!!!!!!! It felt sooooo good. Soooo soft!!!! *passes out* aaahhhhh!!!!!!!!! *kisses each one of my barbz (fans) so they too can taste queen madonna* I love u guys sooo much!!!!
"This video is of epic proportion! Love uuuu!!! (The kiss) was recorded!!! *hopes & prays this footage appears somewhere* I was shocked but kissed back!!! ahhh!"
And when one user asked if the smooch was similar to Madonna's infamous kiss with Britney Spears, Minaj replied, "It was more romantic."