Posted in Press Releases on 11 December 2013 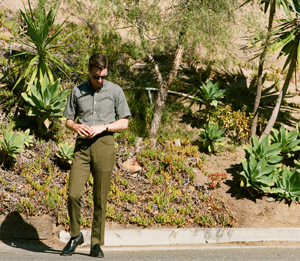 LA-based musician and producer Nick Waterhouse's latest record Holly will be released March 3 on Innovative Leisure. The new music follows his 2012 debut Time's All Gone  ('the soul album of 2012' MOJO) and Waterhouse's production work on friends and label mates Allah-La's self titled record, both of which received widespread acclaim on either side of the Atlantic.

Holly was produced by Waterhouse and Kevin Augunas (The Black Keys, Cold War Kids, Edward Sharpe and the Magnetic Zeros) with song-writing contributions and collaborations from friends Ty Segall, Young Holt Trio and Mose Allison. Of the new music Waterhouse notes, "Thematically this record feels more like a novella, or poem with sections, or even a film, than a collection of songs. It is a work of fiction, with a protagonist, but also a floating omniscient narrator, and fragments of conversation from other characters. I was heavily influenced by my surroundings in young Los Angeles, as well as the concept of fate."

Tickets on sale from 13th December