Nick Lachey has enjoyed a three-day bachelor party in Las Vegas to celebrate his upcoming marriage to girlfriend of four years Vanessa Minnillo. 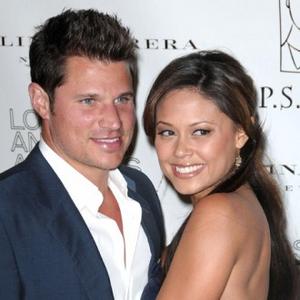 The 37-year-old singer - who is preparing to marry girlfriend of four years Vanessa Minnillo - was joined by brother Drew, former 98 Degrees bandmates Jeff Timmons and Justin Jeffre, and a whole host of celebrity pals in Las Vegas for a weekend-long Celebration.

According to USmagazine.com, the group partied at Sin City's Tao Beach venue, where Nick was presented with a cake in the shape of a ball and chain adorned with the slogan, 'Property of Vanessa'.

While the 30-year-old beauty wasn't present at the celebrations, she reportedly sent a performer along to serenade her future husband and present him with a bottle of champagne.

Nick - who was formerly married to Jessica Simpson - admitted his bachelor party was far from raucous.

He said: "When you get to this point in life, you know, I'm 37, and my college roommates from two different universities, all my high school friends, have all moved on in life.

"A lot of these guys have kids and don't see each other as much as we used to, so this is an opportunity - or an excuse, really - to get together and tie one on for old time's sake."

However, the couple's wedding shower in May was a much messier occasion, with Nick confessing he had overdone it on the alcohol.

He tweeted: "My liver is furious with me!! Great time last night at our wedding shower. (sic)"