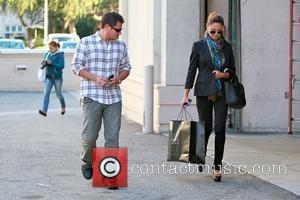 Nick Lachey's fiancee Vanessa Minnillo has laughed off rumours they are planning to escape to Italy to wed over the New Year (11), insisting the singer was "joking" when he mentioned eloping to Tuscany.
The couple became engaged in November (10) and Lachey sparked speculation he was rushing down the aisle by commenting on the possibility of tying the knot while on vacation in Europe over the holiday season.
But Minnillo has dismissed the claims, because they have yet to even discuss wedding dates.
She tells Hollyscoop.com, "He was joking. We're not getting married in Italy.
"I feel irresponsible for not having a date, but someone made a great point: When you're dating, everyone is always asking when you're getting engaged. When you're engaged, everyone is always asking when you're getting married. When you get married they start asking when you're going to get pregnant.
"Instead of keeping up with the Jones', we're just enjoying it."