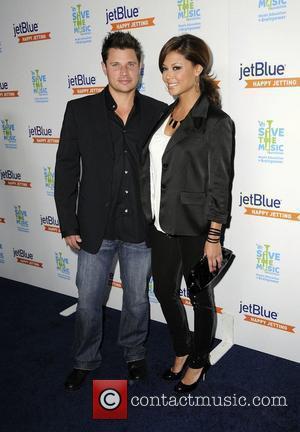 Picture: Nick Lachey and Vanessa Minnillo JetBlue and VH1 launch Save the Music at My House - Arrivals Hollywood, California - 17.06.09

Singer Nick Lachey has split from girlfriend Vanessa Minnillo - just weeks after the model/TV star denied the relationship was in trouble.
The pair has been dogged by rumours of an imminent break up since April (09) amid reports Minnillo was romancing her Disaster Movie co-star Matt Lanter.
The couple, who began dating in 2006 after Lachey's divorce from Jessica Simpson, denied rumours of a split, with Minnillo earlier this month (Jun09) hinting of a possible engagement.
But they have now confirmed reports their three-year relationship is over.
Minnillo's rep tells People.com, "They have amicably split but remain good friends who still greatly care for one another."