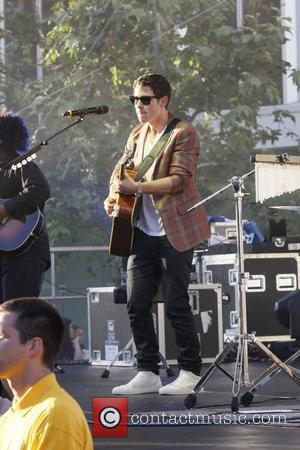 Nick Jonas and Delta Goodrem are rumoured to be engaged according to Us magazine.

The 18-year old singer was dropping hints on his Twitter recently saying "I'm getting so excited about sharing my big news with all of you! Who thinks they know what it is? : )" He recently jetted off to Mexico with his 26-year-old girlfriend, Australian singer, Delta Goodram where they were seen together on the beach in the beautiful resort of Los Cabos. Earlier this year (2011) Goodrem announced the end of her relationship with Westlife singer Brian McFadden while Nick Jonas had recently dated Miley Cyrus. The couple were first seen together in May this year (2011) and have both been secretive about their relationship until these recent announcements on Twitter.

Nick Jonas was born in Dallas, Texas and formed pop-rock band The Jonas Brothers with his siblings Joe and Kevin which gained them international fame. He has been involved with showbiz from an early age and was discovered at the age of 6 and was acting on Broadway by 7. He later went onto make several TV appearances with shows such as Hannah Montana as well as Phineas and Ferb, which broke television records with 10.7 million to make the most watched series telecast ever. He has since released a solo album in 2004 entitled Nicholas Jonas and has won several awards including 2010 Teen Icon Award and Young Hollywood Awards. He is currently starring in comedy series Mr. Sunshine alongside Matthew Perry about a self-involved San Diego sports coach.