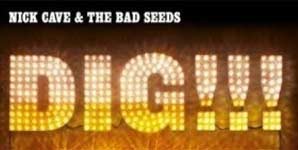 This CD came embossed with the direst warnings against piracy I have ever seen. It wasn't exactly wrapped in barbed wire, but it did take me a long while to get into, and even then the task was only completed with the aid of a sharp kitchen knife and severe danger to the integrity of my fingers and thumbs. Once this review is complete, I'll be carrying out a controlled explosion in a small pit dug in the back garden to avoid the CD falling into enemy hands. It's for the best, honest. Anyway, this is Cave's fourteenth album by all accounts, and one that's been eagerly anticipated

‘Dig, Lazarus, Dig!!!’ swaggers with a street-funk strut, with Nick Cave playing the part of a chronicler of the grimy underbelly of urban life. ‘I can hear chants and incantations and some guy is mentioning me in his prayers’. There are also some genuinely unhinged guitar touches that add to the sense of sleaze and scuzz and an organ that's a bit Doors-y, only good. ‘Today's Lesson’ has a lean, snaky, tense bassline and a chorus that recalls The Stooges, not least in the affirmation that ‘We're gonna have a real cool time tonight’. The brief keyboard solo is pure late-sixties West Coast, and the guitar chops and careers it's wah-wah way through the second half of the song to great effect. ‘Moonland’ begins in swampy lounge-funk mode, with fluttering hi-hats, occasional tambourine and chicken-in-a-basket organ. The guitar is louche, laid-back, and I can't help thinking of half-lit, seamy, late-night drinking dens hidden away down back streets, away from prying eyes.

‘Night of the Lotus Eaters’ is genuinely sinister, a very treated bass accompanying Cave's apocalyptic visions of dragons in the shopping malls (‘They're gonna eat our guns’) while an occasional guitar whines and wails in the background. I don't think I'll be eating any lotus any time soon - not if this is the result, anyway. ‘Get ready to shoot yourself’ comes the order from ‘our catastrophic leaders’. Grim, yet strangely fascinating. ‘Albert Goes West’ picks up the pace with a guitar that's reminiscent of Robert Fripp's turn on Bowie's ‘Heroes’. The vocal (to these ears) is mixed a little low in the loud sections, but on the plus side, we do get to a bloody good listen at the guitar. The utter sleaze underpinning Cave's leering ‘Do ya wanna dance?’ is pitched absolutely perfectly for the song, and the guitar derails delinquently towards the end, produced some really quite horrible noises. Nice. ‘We Call Upon the Author’ is your humble scribe's favourite track on the album. A motorik groove, shards of guitar and some subtle organ touches accompany Cave's spewing, railing words, each verse punctuated with ‘We call upon the author to explain’. There's a weird interlude of very broken dance music and then we're off again, the guitar in freefall, the bass keeping obsessively to its confined groove. Great stuff.

‘Hold on to Yourself’ features a deftly strummed acoustic guitar, some subtly shuffly percussion, an understated electric guitar, Cave in best seedy crooner mood, and just so that you don't get too comfortable, what sounds like a swarm of complaining violins massing to swoop down and sting your ears. ‘Lie Down Here’ has a raging, demented guitar sound, all bent notes and squally chords, with Cave in sleazy entreaty mode - ‘Lie down here and be my girl’. Er ... no thanks, Nick, that's a bed of nails. Underneath all the sleaze and sharp edges, there's actually a sweet little acoustic-driven pop song fighting for its life. It's an interesting battle, and it's hard to say who wins. ‘Jesus of the Moon’ has a lazy, loping feel (imagine the rhythm of America's ‘Horse With No Name’ only a lot darker and you'll be somewhere close). There's a decent turn by the string section to add some creepy atmospherics and mournfulness in tandem with the organ, and - lo and behold! - a flute solo that works very nicely.

‘Midnight Man’ has a sort of ‘Incense and Peppermints’ tautness to the rhythm and the bassline of the verse, decorated by some deft guitar work and a strange mechanised twinkling. It's particularly effective after the organ-driven chorus. It's maybe the prettiest song on the album. The organ is warm in the verse and then bold in the chorus. Any illusion of prettiness is smashed to pieces by the demented guitar in the end section, though, as it rampages through the rest of the song, putting the boot in and the windows through, cackling like a maniac and foaming at the mouth. ‘More News from Nowhere’ is overly long at very nearly eight minutes. For an album that Cave has described as being very Australian, this is the only track that really bears any relation to Australia, conjuring as it does endless skies under which there is very little and nothing really happens. Cave tries very hard to hold the interest with a lot of lyrics, but the music is essentially a bit dull and by-numbers. A bit of a disappointing end.

It's a very decent album, this. It contains references and hints to the New York of Lou Reed, the Detroit of The Stooges and the San Francisco of 1969, plus sundry other moments. The arrangements are good, some of the guitar work is excellent in a thoroughly f**ked-up way, and Cave's undeniable presence seeps through in every single song. It's gritty, seedy and sleazy, and in an age where mainstream music is becoming increasingly sanitised, it's a welcome reminder that there are people out there doing more interesting and less obvious things to good effect.