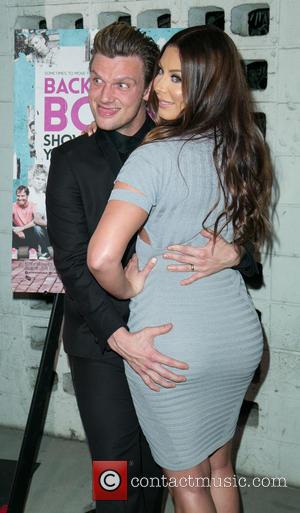 Picture: Nick Carter and Lauren Kitt - A variety of stars were snapped as they arrived for the Premiere Of Gravitas Ventures' 'Backstreet Boys: Show 'Em...

The Backstreet Boys singer has created and co-written the movie, which he will also direct and star in, and he's hoping to recruit the One Direction singer to play his sibling in the made-for-TV film.

Carter took to Twitter.com on Sunday (12Jul15) to pitch the film offer, writing, "Ok @NiallOfficial I know we’re from different generations but... would you like to play my brother in this zombie movie with me?"

While Horan has yet to respond to Carter's tweet, the pop star has already recruited his bandmate A.J. MCLean to play the villain in Dead 7, which will also feature former 'N Sync singer Joey Fatone.

The three boy band stars, along with Carter's wife Lauren Kitt Carter, who is also acting in the movie, promoted the film for the first time at San Diego, California's Comic-Con on Thursday (09Jul15).

Carter teamed up with with bosses at production company The Asylum, the brains behind cult films Sharknado and Z-Nation, for Dead 7, which is described as the story of a "ragtag band of gunslingers who must rid a small town of a zombie plague in a post-apocalyptic West."