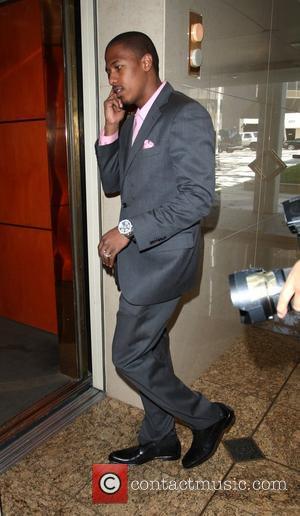 Picture: Nick Cannon is all smiles talking into his phone as he arrives at a business meeting in Beverly Hills Los Angeles, California - 13.05.08

Actor and singer Nick Cannon has stunned fans by marrying Victoria's Secret model SELITA EBANKS after a whirlwind three-week romance. The couple wed in Las Vegas last weekend (ends18FEB07). The pair met at a Super Bowl weekend party in Miami, Florida (04FEB07), and have been smitten with each other ever since. Cannon's past loves include singer Christina Milian and socialite Kim Kardashian, who he reportedly split from last month (JAN07). According to friends, Cannon and Ebanks are planning to hold a wedding reception party in Los Angeles this weekend (ends25FEB07).