Finding the perfect house is an important part of starting a family. But for one family, the perfect house may not be all that they first thought. The Bowen family, Eric (Sam Rockwell), Amy (Rosemarie DeWitt), Kendra (Saxon Sharbino), Griffin (Kyle Catlett) and young Madison (Kennedi Clements) are in for a terrifying surprise, when they discover that their estate was built upon the sight of an ancient graveyard. But rather than realising there is an army of vengeful spirits, they are under attack from a horrific poltergeist. When they seek help from paranormal expert Carrigan Burke (Jared Harris), the poltergeist itself begins to discover everyone's true inner fear, and uses it against them.

It seems you can take a kid out of college but you can't take college out of a kid as two discontented parents find themselves struggling to behave themselves as they take their respective 18-year-old children to visit their new college campus Middleton. George and Edith are total opposites who find themselves completely uninterested in each other's quirks initially; George is a serious, suit-wearing heart surgeon desperately worried about the academic future of his overly chilled out son, while Edith embarrasses her hard-working daughter with her laidback attitude and never being too afraid to speak her mind. When the parents find themselves separated from the campus tour, they actually start enjoying each other's company and slowly but surely begin to fall in love as they help each other come to terms with the complications of parenthood.

Working as a Chalet girl isn't as easy as some people might think. Kim is a nineteen year old girl who's just been given a big break and offered the chance to work in the Alps as a chalet girl, Cooking, cleaning and basically attending to her employer's families every need are just some of her daily chores.

With absolutely no experience Kim might be out of her depth but stumbles through the first couple of days looking after businessman Richard Masden and his family, however she finally finds her feet. There might be hard work to do but there's also a whole load of fun to be had, suddenly propelled into a world of money and parties Kim quickly becomes accustomed to her new way of life and also finds herself falling for the bosses son Jonny, just two problems stand in her way; his mother and his girlfriend! 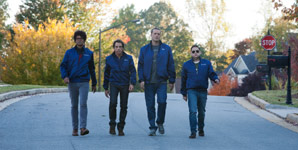