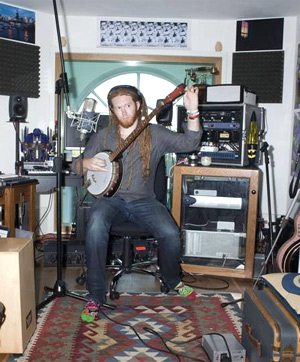 The double number 1, multi-platinum, Brit nominated, acoustic guitar virtuoso Newton Faulkner is about to make a bit of history, as the recording of his fourth album 'Studio Zoo' is being streamed live online, 24/7 for 5 weeks from next week - like The Truman Show, but this time it's for real!

His home studio in East London is set up with 4 cameras, to follow every detail of the ups, downs, dramas and laughs of recording an album - and as with his renowned live performances, this will truly be a one-man-band, with no producer or engineer, just Newton, a bunch of guitars, plus a few special surprise guests.

Newton said: "I am as excited as I am terrified by the prospect of having a house full of cameras film me while trying to record an album. The entire recording process will be streamed live and nothing has been recorded in advance - apart from some particularly good hand claps recorded in Paris.  The album will be made before your very eyes, no tricks, no producer and no engineer, just me, a guitar and a few surprise guests."

There'll be regular updates on the social networks, so fans know exactly what's coming next and when to be sure to get online and not miss a thing. They'll also get the chance to interact and give their own views direct to Newton in the studio and maybe even influence decisions on the album. 'Studio Zoo' will be released on August 26th.

Newton's last album 'Write It On Your Skin' went straight to number one in the UK along with his platinum debut record. He has sold over 1.5million copies and has just finished a sold out world tour which took him to Australia and the Far East.