Review of Hand Built By Robots Album by Newton Faulkner 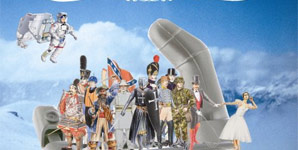 A boxful of paradox, a stroke of acoustical bliss, a meaningful approach to music writing and elusive sounds, Newton Faulkner finally releases his exquisite and highly inspirational debut album. "Hand Built By Robots" proves to be a monumental debut filled to the rim with surprise and anticipation. An album drenched in thought, reflection and new ideas.

An inventive and truly pioneering artist; Faulkner opens this album with an instrumental and innovative introduction; the start of what is sure to be, a similarly experimental and electrifying album.

"To The Light" is a radiant tune; an innovator's toast to thriving ancestors such as James Morrison and Paolo Nutini. "I need something" is one of those tracks that have it all and are in need of nothing. With a fresh sound, a grand comprehensive chorus, stunning guitars and panoramic aspiration, what more could any acoustic aficionado ask for?

This is followed by a succession of harmonically brilliant tracks; "All I got" a clear-cut simple but appropriate track, "Dream Catch Me"; a Snow Patrol-esque buoyant and succulent track, and "Feels Like Home" a powerful and emotional blend of Paolo Nutini and Jack Johnson with bongo's, tender guitars and light-stated vocals.

This transition leads up to an amazing, compelling and compassionate pinnacle moment of the album, "Teardrop". It's just as if the album was leading up to this point. It's far from just another drop in the vast musical ocean. It's something else, something special and something immense. However, Newton Faulkner is not for stopping there. Oh No, quite the opposite in fact.

He maintains the same measure of vibrancy in the subsequent track. The sense of joie de vivre beaming from "Gone In The Morning" is too hard to resist. It exposes a scuffling, resilient, unfamiliar slant to Faulkner's disposition.

After which is an interlude section; from an instrumental experimentation with the sitar in "Sitar-y thing", to Faulkner's interpretation of Cherry Ghost in "Uncomfortably slow", to a sense of depth and grandeur in "Straight Towards The Sun".

The album ends with an extended finale, strutted over six tracks. The first "People Should Smile More" is a strikingly familiar but indistinct track; walking-pace with acoustic guitar and sheer genius. "She Got Time" is a timeless, vintage sounding track sampling the Beatles.

Sounding incredibly mysterious and mystifying, as its title, "U.F.O" captures the melodramatic and probing nature of the modern world we live in, to the ambiguity of the unknown, enormity of the universe.