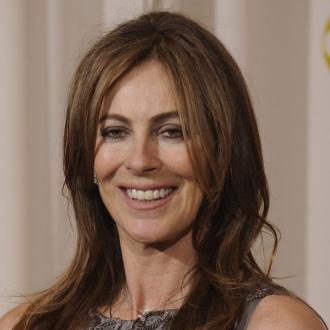 The director failed to receive a nomination for the 2013 Academy Awards' prestigious Achievement in Directing category, despite being predicted to make the shortlist following her 2010 win for 'The Hurt Locker' as well as widespread praise for her new film about the decade-long manhunt for Osama Bin Laden.

Megan took to Twitter after the nominations were announced yesterday (10.01.13) and posted: ''Kathryn Bigelow was robbed. So f****d up.#recount''.

Fans of the film quickly jumped to Kathryn's defence, as well as expressing their distaste Paul Thomas Anderson also failed to receive a nod for his dark cult drama 'The Master'.

Aaron Stewart-Ahn wrote: ''you and her & PTA made the movies that will stand the fourth dimension of time & appreciation. A much greater thing to have'', while Josh Bruntsting added: ''PTA is a bigger snub.''

'Zero Dark Thirty' is up for a total of five awards including Best Picture, but Kathyrn lost out to 'Amour's Michael Haneke, Ang Lee for 'Life of Pi', Steven Spielberg for 'Lincoln', David O. Russell for 'Silver Linings Playbook' and Benh Zeitlin for 'Beasts of the Southern Wild' in the best filmmaker category.

The contenders will battle it out for the win at the ceremony on February 24.

Kathryn is also up for a Golden Globe along with the film's leading lady Jessica Chastain, and has already been honoured by the New York Film Critics Circle with the Best Director gong.