You Know you’re a Metalhead When…

Are you a true metalhead? Check out this list to find out if you fit the criteria to label yourself has a hardcore metalhead or just a wannabe 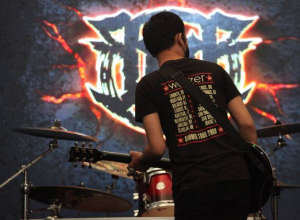 There are so many variations of the definition of 'metalhead'. But the truth is, a true metalhead can tell between another fellow metalhead and an amateur who’s posing as one. The reality is, a true metalhead eats, sleeps and breathes metal music. It’s in the way they dress, talk and behave. Heck! True metalheads even choose other pastimes involving this much-loved music genre. In fact,for all the metalheads who love playing the occasional online slot, you best believe there are games catered to your music tastes!

Now, let’s take a look at some signs that may prove beyond doubt that you are a true metalhead.

Your Wardrobe is as Black as the Ace of Spades

Okay, we must confess that this is a pretty stereotypical characterization of a metalhead and one that is not conclusive by itself. There are subcultures other than metalheads that also like to dress in all black. Just because you’re dressed like you’re going to a funeral; it doesn’t necessarily make you a metalhead.

Having said that, it’s hard to fathom any metalhead that doesn’t have at least a dozen black metal band t-shirts. The black isn’t limited just to t-shirts either. The more hardcore metal heads are going to be dressed in black from head to toe, this includes black jeans, black hi-top sneakers, and maybe even black nail polish in some cases. So, if this sounds like your wardrobe then you could very well be a thorough-bred metalhead.

If pop music makes you want to punch someone in the face, it could be a good indication that you’re an out and out metalhead. Most metalheads are able to see right through the façade of pop stars, boy bands and girl bands and it irks them to say the least. Most pop songs are depressingly shallow and if you have to sit through another break up song, you might just blow your top. If this sounds like you, chances are – you’re a metalhead.

May be you don’t mind the occasional rock song or a pop song with some actual talent, but mainstream music is formulated for the masses and they care more about how the artist looks and what the artist wears. A simple and catchy tune that artificial intelligence can easily spit out, unfortunately, sells better than the most complicated metal riff. You just wish people understood the immense talent metal bands possess. And metal music is supposed to be good for you.

You Can Almost Understand all the Growls

To anyone else, the vocals in a death metal song will likely sound like the singer has been possessed by a demon that is eating them from the inside out. However, you can decipher a good chunk of the growls without even having the lyrics sheet. This is a proper indication that you’ve trained your ears and brain over the years to understand growling. You’re not just any metalhead, you’re into proper death metal!

You get ticked off every time someone asks you why they don’t just “sing” instead of growling in metal songs. You don’t even have the inclination to help them understand that different music genres are defined by different characteristics. In blues, they howl. Jazz is characterized by vibratos. In death metal, growing is how you express the emotions of the lyrics and it would not be justified if it was just “sang”. Metal music is not just sounds; it is about feelings and the delivery of these feelings matter.

Also, non-metalheads will simply not understand the joys of first enjoying the feeling a metal song gives you, and then reading the lyrics to unveil another layer of profoundness to the song. It’s like you discover the meaning and it makes it much better. You’re not always supposed to understand the growls right away. Metal can be sophisticated and layered; it’s not like mainstream music which is usually vain and gimmicky.

You’ve Woken up with Headbanging Neck Syndrome More than Once

Metalheads love metal concerts! What do you do in metal concerts? Well, you headbang all night long! Even though headbanging isn’t outright dangerous, it can cause whiplash and overuse of neck muscles that are otherwise not conditioned. And you can wake up with an incredibly stiff neck…..

Anyone that’s experienced this would quickly trade it for the meanest of hangovers. At least a hangover will go away after a good long slumber, but a headbanging neck can last 2 or even 3 days.

Experienced metalheads may even have protocols to avert the headbanging neck. They know a few nifty neck-stretches that they can do before and after a metal concert to alleviate the symptoms in the following days.

The most hardcore of metalheads don’t even get stiff necks anymore, they’ve headbanged so many times that their neck has simply become conditioned to the movement. Headbanging feels like home.

You May Look Intimidating, but you Wouldn’t Hurt a Fly

Metalheads can look mean and unapproachable, but only people close to them know that they’re actually some of the kindest souls around. They use metal music to vent out and don’t carry around hate and frustration everywhere they go. Metalheads are some of the nicest guys and gals out there. They may roll their eyes when you play Justin Bieber, but they have a lot more humanity than their appearance leads you to believe.