What Made Live Aid So Popular?

Live Aid why it was so popular

Whether or not you were around in 1985, the chances are you will have heard of Live Aid. In fact, you have probably some if not all of the show at some point. It was a concert made up of show-stopping performances and heartfelt pleas for us all to do a little better. However, what exactly was it that helped make Live Aid So Popular? 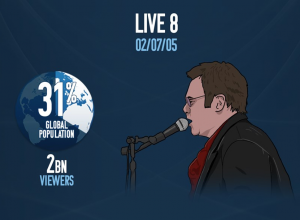 A Look at Live Aid

The Live Aid concert took place on the 13th of July 1985 – with two concerts taking place simultaneously – Philadelphia and London. The idea behind it was to raise awareness and funds for the Ethiopian famine crisis. Whilst there can be no denying that it raise the profile of what was happening and made many more people aware of what was happening in that part of the world; the fact that it is arguably one of the best gigs that ever took place is something that shouldn’t go unnoticed either.

There is no denying that the line-up for the shows is something that caught the eye of most music fans back in 1985. In fact, Phil Collins even jumped on a concord and flew between the US and the UK so that he could perform at both concerts. The show itself featured more than 75 acts and raised over $125million for the cause. Part of the reason people wanted to tune in and watch from home was to be able to watch their favourite acts. Headliners included Elton John, Madonna, Sting, Duran Duran, David Bowie, The Who and of course, Queen. Queen put on a 21-minute performance which to this day is considered their best ever performance.

The Lead up to the Concert

Organised in just 10 weeks, Bob Geldof was the brainchild behind the international event. Being such a well-known and connected musician helped to ensure that some of the biggest rock stars on the planet were roped in to take part in the concert. Of course, this meant that many of them talked about the upcoming show in TV interviews and the media before it took place, helping to make sure that as many people knew about the concerts as possible

You only have to watch back on some of the clips from back in the day to see that the stage was full of passion and adrenaline - and that made it a fantastic show to watch. It is thought that just under 40% of the popular turned in to watch the show take place – quite an accolade for live broadcast TV back in the 1980s. Research by online slots provider Betway shows that 19BN viewers were watching from homes all around the world. Without a doubt, the pressure was on for all of the acts to put on a good show – and for lots of them, their performance on this day has since been hailed as their best performance ever.

The show, the acts and the charitable theme behind the show are certainly what helped to ensure that the popularity of Live Aid lived up to its reputation.