We live in a world where accessing any kind of music is at its most simple, which means that underground artists and indie labels can be appreciated by more and more people with the click of a button. Unfortunately, this means that the musical gatekeepers are out in their droves, determined to enforce a kind of "membership" on anyone they believe doesn't fit their idea of a "real fan". 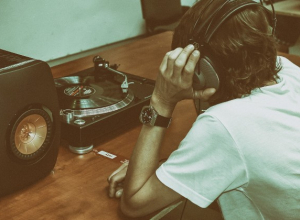 A prime example of this recently is when TikTok star Zaria was called out for wearing a Metallica T-shirt in one of her posts. She was asked to "name three songs" by the band, and she responded by flawlessly shredding three popular riffs from the band on her electric guitar. A very awkward day for metal elitists everywhere.

The funny thing is, very few people even realise what they're doing, so we've put together this handy guide on how to recognise whether or not you are an elitist...

1. You have said "name three songs" after seeing someone in an alternative band T-shirt

Assuming that anyone who doesn't match your idea of someone who would be into that type of music is wearing an alternative band shirt purely for the aesthetic is classic elitist behaviour. Keep your aspersions to yourself! That person may genuinely be a fan of Nirvana/Joy Division/Metallica/The Ramones.

2. You judge people who enjoy an old band's new music, proclaiming "the old stuff is better"

If bands weren't interested in attracting new fans to their music, they wouldn't release new music. You can prefer a band's older material, but just because you've enjoyed a band for a longer period of time doesn't make you more of a fan than those who have only recently got into them.

3. You scoff disbelievingly when you discover that a popstar likes some of the same music you do

Miley Cyrus is doing a rock album? WHAT?! Doja Cat does a metal cover of her own pop song? It's TERRIBLE! (Though you haven't actually got round to listening to it yet). Sometimes a person's public aesthetic is completely different to what they may enjoy at home, and besides, it's perfectly possible to enjoy both alternative and mainstream music.

You're not a "real" fan until you've seen a band live more than once. It's an inference we hear way too often. It doesn't seem to matter if a person's mental health, financial situation, location or even lack of interest in events prevents them from seeing live music, if you don't support a band on the live circuit you can't count yourself among their true fans. This one has really got to stop.

5. You have used the word "poser" unironically

It's a word that's thrown about far too easily, especially in regards to those who enjoy social media and invest time and money into their physical image. You can't judge the depth of someone's interest and dedication to a type of music based on how they do their make-up or what labels are on their clothes.

6. You are reluctant to listen to, much less enjoy, anything that's in the charts

Even if it's something you might enjoy, if it's attracted a mainstream audience it's not for you. This doesn't make you a fan of music, this makes you a obsessed with being "different" at best and a contrarian at worst.

7. You talk about obscure genres like they're close friends of yours

You're not interested in your basic rock, pop, metal, folk or indie genres, but when it comes to folktronica, hypnagogic pop, witch house and kawai core, you just won't shut up about them. What's more, if someone asks what any of those mean, you'll list off a bunch of bands you know they won't have heard of before scoffing: "I can't believe you haven't heard of [insert obscure band name here]!"

8. You hate it when people mis-label music

What's worse than insisting on using obscure labels for music? We'll tell you - it's getting irrationally mad when someone classifies a band as a genre that you disagree with. Yes, The Cure technically isn't a goth band, but goths still love Robert Smith so calm down. And Poppy is a pop artist, but that doesn't mean you can't describe I Disagree as a metal album.

9. Your guilty pleasures are the sort that you intend to take with you to the grave

Everyone has guilty pleasures when it comes to music, and most of us are happy to share those nuggets of embarrassing information for the purpose of self-deprication. Not an elitist though; they will never have S Club 7's Reach on a playlist - at least, not one that they'll ever let anybody see.

10. You refuse to dance to or sing along to popular or cheesy songs for fun. Even at Christmas. ESPECIALLY at Christmas.

Getting rowdy and bopping along to terrible dated classics is a key part of any Saturday night out; in fact, that's why tacky music exists. It's fun. Elitists take music way too seriously to be seen appearing as though they enjoy anything that sounds even a little bit fun, however. These type of people are also those who constantly moan about Christmas music being played in the shops.