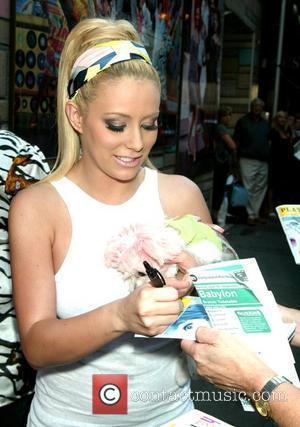 Picture: Aubrey O'Day from the girl group Danity Kane, accompanied by her pink haired puppy Ginger, signs autographs for fans after appearing in the Broadway...

HAIRSPRAY creator John Waters has been forced to scrap plans for a new children's movie - after studios rejected it.
The filmmaker, nicknamed the Pope of Trash, last year (08) announced his plans to make a kids Christmas movie starring Johnny Knoxville.
He described the film, to be titled Fruitcake, as "Little Rascals on acid".
But the movie has been axed, and Waters is blaming the economy, and unpredictable studio executives.
He says, "I can't get it made.
"It's a children's movie. I thought it would do well, but it's not."
And he insists he is baffled by the decision: "I saw The Reader. Here's a movie that asked you to root for a paedophile Nazi guard. That got made."
Waters admits he is worried about where his next paycheque will come from - now his Broadway shows Hairspray and CryBaby have closed - adding, "In this economy, I'm going to have to do a puppet show."