Tyler, The Creator banned from UK

Tyler, The Creator has been banned from entering the UK for ''3 to 5 years'' for his controversial lyrics which ''encourages violence an intolerance of homosexuality''. 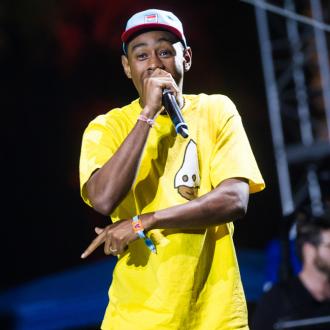 Tyler, The Creator has been banned from the UK.

The 'Yonkers' musician has been prevented from entering the country due to his controversial lyrics, which is why several of his shows including appearances at Reading and Leeds Festival have been cancelled.

He tweeted: ''BASED ON LYRICS FROM 2009 I AM NOT ALLOWED IN THE UK FOR 3-5 YEARS ( although i was there 8 weeks ago) THAT IS WHY THE SHOWS WERE CANCELLED.

The 24-year-old rapper has been defended by his manager Christian Clancy, who confirmed he had been banned but insisted the songs were written a long time ago, appearing on releases in 2009 and 2011, so claims Tyler doesn't deserve to be punished now.

Writing about the news on his tumblr account, he explained: ''tyler has been banned from entering the UK for somewhere between 3 to 5 years per a letter from the secretary of state for the home department of the united kingdom. the letter specifically cites lyrics he wrote 6-7 years ago for his albums bastard and goblin - the type of lyrics he hasn't written since ... highlights from the letter include that his work ''encourages violence and intolerance of homosexuality'' and ''fosters hatred with views thats seek to provoke others to terrorist acts.''

''to say that i am confused would be an understatement. can you imagine being beholden to things you said when you were 18? tyler has been to the UK over 20x in the last 5 years without incident.

''more importantly, this is a broader issue of free speech, with new lines being drawn that include reaching back in time without acknowledging growth. in fact, punishing growth. what i do know is tyler is part of an argument that is counter to who he has become. how do you punish someone for growing up? since the letter acknowledged he was writing from an alter ego perspective does this then apply to book writers? (sic)''