If nothing else, the 2018 reboot flick Tomb Raider certainly delivered on its aim of bringing Lara Croft from the most recent Survivor Trilogy to the big screen. The story beats and the few excessive, gravity-defying stunts didn’t quite hit the mark, but Alicia Vikander was perfectly cast for this modern iteration. Surrounding the Swedish Oscar-winner, Dominic West, Walton Goggins, and Daniel Wu also turned in good showings, so there were many things to enjoy about the action-adventure movie. 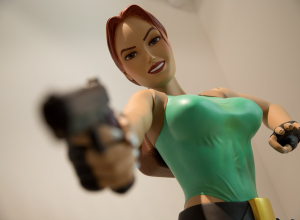 As listed by The Numbers, it broke $273,477,501 at the worldwide box office, narrowly topping the first of Angelina Jolie’s two-film stint from 2001, which reeled in $273,330,185. While the reviews were mostly middling, it was never a film made to dazzle the critics, and enough people enjoyed it to encourage a sequel. After Ben Wheatley dropped out from the project, Misha Green came onboard, fresh off of the excellent series Lovecraft Country, looking to blend similar doses of fitting fantasy and sci-fi horror elements into the next film.

Now, however, we know that Tomb Raider 2 – or rather Tomb Raider: Obsidian, per PSU – isn’t to become a movie. There are a lot of moving parts, but essentially, the studio missed the boat, got gobbled up by a mega-corporation, and now we’re waiting to see where the rights will go. Luckily, there’s a lot of enthusiasm behind bringing Lara Croft to the big screen once again.

When news broke of Amazon buying out MGM – the company behind Tomb Raider (2018) – Vikander was asked to comment on the status of the sequel. She simply said that the film is “in somebody else’s hands now.” That came in the middle of July, clearly indicating that the Amazon buyout was more than preoccupying the then rights owners as the sequel was effectively killed off months before. As CNBC reports, the deal to buy MGM closed in March 2022, but properties were still up in the air come July.

According to The Wrap, MGM had until May 2022 to just greenlight a Tomb Raider sequel – four years after the reboot was released. Instead, the production company did nothing, which was likely a direction taken by Amazon. In the meantime, on 2 May, it was announced that Embracer Group had acquired the Tomb Raider IP from Square Enix Holdings Co., Ltd. That deal was officially completed on 26 August. However, the film rights returned to producer Graham King’s GK Films, who acquired them in 2011 from Square Enix.

Recent news details a hefty bidding war among movie studios to get the rights to the next Tomb Raider movie. Given the state of the streaming wars and companies betting big on popular IPs, it wouldn’t come as a surprise if a streaming platform takes on Lara Croft’s next big-screen adventure. Meanwhile, images have emerged of what Tomb Raider: Obsidian could have features. Artist Jake Lunt Davies was kind enough to post a bunch of storyboards to his Twitter account on 30 August, showcasing some of the events.

The storyboards for the Tomb Raider sequel showcase a storming of Croft Manor, presumably seeking the treasures that the lavish estate keeps, Comicbook details. Importantly, one of the people named among the attackers is Rourke, who features in Shadow of the Tomb Raider as one of the main bad guys. Still, this has all been put to bed now, with a new cast, writers, and production team expected. A lot of the buzz of late, Cinema Blend writes, has been around Aubrey Plaza picking up the baton, which she’d apparently be up for doing.

Even with the movie likely being a few years away, at least, Lara Croft is set to become even more prominent. The new IP owners, Embracer Group, told GamesIndustry.biz that film’s an increasingly important area for the Group and that TV and film are great ways of building out an IP like Tomb Raider. They’re looking to combine mediums to craft an even stronger IP for the original, legendary action game heroine. Now that the control of the franchise has been fully handed over to Crystal Dynamics again, the next games look to be secured.

Outside of the games, Lara Croft is, undoubtedly, one of the biggest names in entertainment, and the character has already gone beyond the realms of gaming several times in the past and very recently. Tomb Raider The Live Experience looks to have been a hit in Camden, with it still being possible to book tickets to the adventure experience. Reviews, like this one from Tech Radar, have praised it immensely, calling it “an immersive time,” and that it’s great that the valuable brand can “extend beyond film and games.”Of course, entertainment media is where Lara Croft and the Tomb Raider brand will always find its home.

Like with the movies, older Tomb Raider slots now have much more modern iterations at Betway Casino and have proven very popular. Still sitting on the Top Games page despite its 2019 release, Lara Croft: Temples and Tombs sends players deep into an ancient Egyptian tomb to find mystical artefacts and earn the favour of the gods. With modern slot features and the modern depiction of the main character from titles like Temple of Osiris, it showcases Lara’s near-unlimited versatility in entertainment. Also on the way is an animated series for streaming, which NME has confirmed will star the quintessentially British Hayley Atwell as Lara Croft.

Tomb Raider is one of those mega IPs that creatives could do just about anything with if the right team’s involved. Whichever company gets the rights to the next movie will undoubtedly draw in a huge audience, while everyone gets to enjoy Lara Croft’s other non-cinematic ventures in the meantime.