Can Eugene Survive Past 'The Walking Dead' Season 8?

The character has defected to Negan and The Saviours; does that mean his future is in jeopardy?

Though it's currently facing a slump in the ratings and hit a five-year finale low with the conclusion to the show's seventh season, 'The Walking Dead' still proves to be one of the most popular shows of the modern day. Now with those seven seasons to its name, production on an eighth outing has started, with teasers about what to expect already finding their way online. 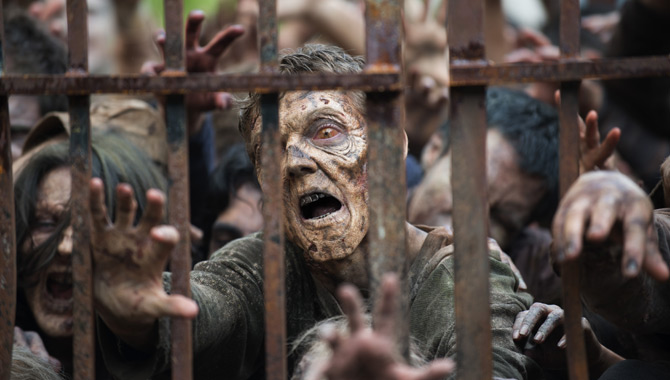 Walkers plague the lands in 'The Walking Dead'

In the season 7 finale, we saw the declaration of all out war - a story arc that those familiar with the Robert Kirkman comic book series will be very familiar with. Rick Grimes (Andrew Lincoln) and his fellow survivors have pulled together groups from various locations to do battle with Negan (Jeffrey Dean Morgan) and his band of Saviours.

It's a battle that's already seen fan-favourite character Sasha (Sonequa Martin-Green) leave behind her life, and one that's allowed King Ezekiel's (Khary Payton) tiger Shiva to make a meal out of some of Negan's finest men.

What lies ahead now however is anybody's guess. What we know however is that for one character in particular, loyalties have changed. Josh McDermitt's Eugene has officially defected to Negan's group, but what does that mean for his future on the show?

Speaking to Variety, series showrunner Scott Gimple explained: "He said he's Negan in front of everybody. He has still not found the strength to get over his fear. He's still Negan after seeing everything Sasha is doing. I don't think it looks good for Eugene. But with everything Sasha said to him, maybe his courage is just lying dormant."

Eugene has always been a cowardly character, first introduced through Rosita (Christian Serratos) and Abraham (Michael Cudlitz), who thought they were protecting him and getting him across the country alive because he had the answers to 'curing' the walker epidemic. When it came out he was lying simply because he wanted some bodyguards on the road, his whole world came tumbling down. Fortunately for him, those he had aligned with managed to find empathy in their heart, and with them he stayed. With the protection of the Saviour's lands now at his feet however, he seems to be very comfortable where he is; even if that means turning his back on all those who have helped him up until this point.

'The Walking Dead' returns to AMC later this year in the US, with the eighth season then set to premiere in the UK on FOX.