The Vamps are to 'offer up nostalgia' with 10th-anniversary tour

The Vamps want to "offer up nostalgia" with a 10th-anniversary tour as they look back on their time together since first finding fame on YouTube. 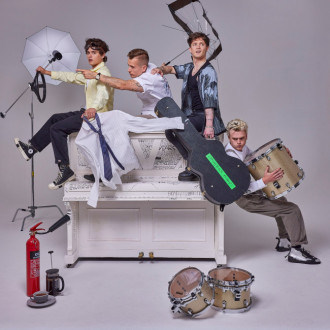 The Vamps are to "offer up nostalgia" with a 10th-anniversary tour.

The boy band - which consists of Connor Ball, 26, Bradley Simpson, 26, Tristan Evans, 27, and James Brittain-McVey, 28 - first found fame on YouTube back in 2012 and have so far released five studio albums, and are set to celebrate their milestone with a special Greatest Hits "fanzine" and an arena tour across the UK in November and December 2022.

James exclusively told BANG Showbiz: "I think for a lot of people, there are various moments over the last 10 years that offer up nostalgia. Up until this point, every tour has been based on a specific album, like last year we had the ‘Cherry Blossom’ album and tour in September.

But this one is going to be different because we want to get all the albums from the last decade into the show. Hopefully, it will be the sort of show where – some people might have been really big fans of the first or the second album and we want people to relive those moments with us.

It's going to be emotional, but it’s going to be so hard to pick a set list because we’ve got five albums now!"

Over the last ten years, the boy band has enjoyed mammoth success with songs such as 'Can We Dance and have collaborated with the likes of Demi Lovato and Taylor Swift, with lead singer Bradley gushing about how they have all had the chance to meet their heroes over the last decade.

Bradley said: "Meeting [Foo Fighters star] Dave Grohl for me was just ridiculous because he’s been one of my idols for so long. They say don’t meet your heroes but it was just very inspiring to learn that you can be a good person and also just be a sheer legend. Connor got to meet Brendon Urie from Panic at the Disco.

James as well, like when we got to tour with Taylor [Swift] which was amazing."

Meanwhile, Bradley spoke of how he had his own "full circle moment" when a fan had spoken to him recently and explained that The Vamps had served as a source of inspiration for him to take up music.

He said: ": It was weird because I went to the gym the other day and this guy came over when I finished and said ‘I didn’t wanna say [earlier] but you guys got me into music and I am now going to university to do music studies and I just wanted to say thank you for everything.’ It was so weird because we had people who did that for us and now that someone is taking up music because of us – it was just like the weirdest full-circle moment!"

'10 Years Of The Vamps: The Greatest Hits Tour' goes on sale 1 July.