The Faces have recorded 14 songs since reforming

Faces drummer Kenney Jones has revealed that he and his bandmates Sir Rod Stewart and Ronnie Wood have recorded 14 new songs since reforming. 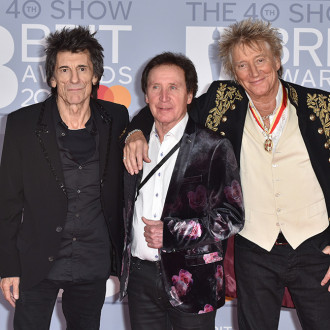 Kenney Jones says the Faces have recorded 14 tracks since reuniting.

It was revealed in the summer that the reformed 'Stay With Me' rockers - drummer Kenney, guitarist Ronnie Wood and singer Sir Rod Stewart - were back in the studio laying down music, and now Kenney has revealed that the fresh material is a mix of unearthed previously unreleased songs and new material that they have written.

Speaking exclusively to BANG Showbiz, he said: "We've done about 14 songs, it's a mixture of stuff we never released which is worthy of releasing and there's some new stuff which is really wonderful. Rod is writing the lyrics and he's really keen on it."

Kenney has also spilled on the Faces' live plans, revealing that the band intend to play several massive shows and are eyeing up venues such as The O2 in London and New York's Maddison Square Garden.

He added: "Whether or not we're going to go on a big extended tour remains to be seen. What we have decided is to do some really big gigs like The O2, Maddison Square Garden, some other big venues in America,

"Nothing elaborate on stage, just bring back The Faces live."

Before he drummed in the Faces, Kenney was a member of The Small Faces along with Steve Marriott, Ronnie Lane and Jimmy Winston, with Ian McLagan replacing Winston as the band's keyboardist in 1966.

He has just released 'Small Faces - Live 1966', the earliest live Small Faces concert recording, on his own label Nice Records.

And Kenney has been trawling his musical archive for other lost gems, and he says between him and Ronnie Wood they have discovered almost 100 lost songs.