With his debut album 'Super Thinking' out now on Poster Boy Records after a two-year creative process, we had a thoroughly entertaining and illuminating chat with multi-instrumentalist James Pain as part of his new project, tameBERSERK. 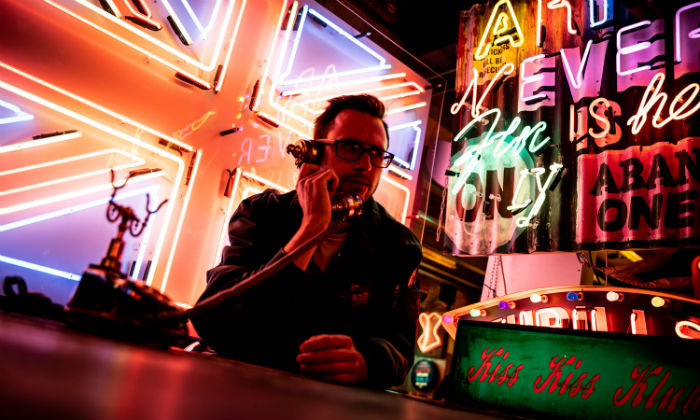 In short I'd say 'weird pop with some alt-rock tendencies'. If you knew me and my taste in music you'd hopefully get that it's a real melting pot of all the music I love. There's a backbone of rhythm that's super key to most of the tracks, I've always looked at the drums as a totally equal part to the melodic instruments. Song to song can shift quite a lot but I've always had an ear for a hook so there's no shortage of those and I like to throw in vocal samples from all sorts of places and guitar solos in equal measure. I'd like to think there's core songwriting at the base of most tracks, but with a whole palette of texture and sound on top, making it an interesting listen sonically, if nothing else.

To be honest, I started tameBERSERK with very realistic expectations. I've been in bands since I was 19, have managed venues, promoted, and have friends in touring bands and throughout the music industry so I feel I have a pretty solid understanding of the current climate. I really wanted to do as much of this without any music industry involvement and I think you can now; no-one is reliant on labels anymore to make an impact. My biggest challenge is the same as everyone else I guess, getting people to listen to your music. It's an incredibly saturated market as we all know and trying to stand out is tough, especially for me with tameBERSERK not being a regular live thing. If you believe in what you're making though, you just have to carry on and do all you can.

Pretty tough I reckon, largely due to the insane amount of music that's out there. The ability to make high quality music from your home has opened things up so much, which is obviously a good thing, although it means there is more music out there than ever. Even getting a break like supporting on an big theatre tour or getting on an advert doesn't really mean you'll be able to make music as a full time occupation anymore. For me I did things in a totally backward way and I knew that from day one. In theory you're meant to gig your a**e off, release a couple of singles, build a fanbase and build up to an EP and then album release. I basically locked myself away for 18 months to record an album and then once it was almost done, started presenting that to people slowly. Given that Dom, who sings for me, is mega busy with his own band who are killing it in 2019, regular shows have been tough so thats not helped get into the live scene.

I've had a 5 piece band where I wrote everything and taught it to everyone else, and I've had an incredibly collaborative band where everyone played at least 2 instruments and wrote lyrics. Both had pros and cons. I'm pretty happy that tameBERSERK is fully my thing though; it's the first time I've felt I've been truly able to make the exact music I want to without any limitations or compromise. It's tough not having anyone to bounce ideas off sometimes so I think you've really got to have a clear idea of direction if you want to achieve, if you've got 100% creative control.

I think as I've matured as a writer I thankfully now write songs that don't come from one specific place of inspiration. I'm an indie kid at heart having grown up between 2001- 2007 but don't tend to pull all that much from that era weirdly now. A lot of my favourite bands aren't a big influence on the music I've made as tameBERSERK. I can really relate to artists who started out as bedroom musicians or self-produced in small studios. Ian Parton did it with The Go! Team, one of my favourite bands, Simple Kid made two incredible albums in the 00s himself, Metronomy started out at home, Jamie T too. I think like all good artists though, you try and draw inspiration from everything you listen to in a way, even if a song is on somewhere that I don't particularly like, I'm always thinking about the parts of the track; is there a rhythm or structural shift that I can build an idea around. More specifically, an album that only came into my world a few years ago was 'Here Come the Warm Jets', Brian Eno's debut album. It blew me away and I guess it became a bit of a blueprint for what I wanted my album to sound like as a whole. It just combines early 70s rock, pioneering synth sounds, idiosyncratic lyrics and all out weirdness so perfectly. The diversity of sound, song structures and mood was something I really wanted to bring to tameBERSERK as a whole.

Lyrically I take inspiration largely from books and TV shows I watch, normally disfiguring the initial theme of the inspiration to create a different angle on it.

I'd love to work with a great female singer at some point with Karen O and Annie Clark right at the top of that list, they're both outrageously talented. There's a bunch of writer/producers that I would give a kidney for some studio time with: Brian Burton, Mark Ronson, Dave Sitek, Brian Eno. Mainly because I think they'd improve my ideas tenfold and steer things in a direction I wouldn't have thought of. I sometimes wonder what my album would sound like if I had a month to re-record it with Brian Burton in a top studio. Maybe it would be crap though, who knows?

I have several weird things related to clothing. 1) I believe in left and right socks and sometimes try 3 different socks until I find one that's suitable for that foot. 2) I have an instant panic attack if a jumper or T-shirt gets stuck whilst taking it off, even for a second. 3) I really struggle with the zip on my winter coat... probably because I'm an Arsenal fan. Random enough? You did ask...

I'm past wanting to 'make it' in the music industry, whatever that means. People still say that a lot to me, "Oooh, do you think you'll make it and be able to quit your job?" Seriously?! The goal I set out with tameBERSERK a couple years back was just to make an album I was totally happy with and proud to put out into the world. I literally wouldn't have been able to die remotely content without doing this at least once in my lifetime. Now my goal is just get it out there into as many peoples lives as possible because I think when people hear it, it'll be something they haven't really heard before.

Probably playing guitar in Kanye's Sunday Service? Seriously though, I have an awful lot of music left in me but hopefully working on a new project with some other people (probs not KW). It's probably time I worked on something more collaborative again. I'd actually love to produce beats for rappers so I'm going to explore that a little bit. Oh, and I wouldn't mind a Mercury nomination if that's not too much to ask?

My psychedelic video for Favourite Years is out this week followed by the album next Thursday. The week after iI'm playing an album release show in Hackney Central at Paperdress Vintage so a busy month. I've recruited two old childhood friends for the live show too so we've having some fun rehearsals at the moment. Then really the plan is to just keep promoting this thing I've made that I've committed the last 2 years of my life to! There's likely to be a few more tunes from tameBERSERK released early next year as well as I ran out of time with a couple of nice tracks.