Take That will make a comeback after frontman Gary Barlow finishes with his current project, solo album 'Music Played By Humans'. 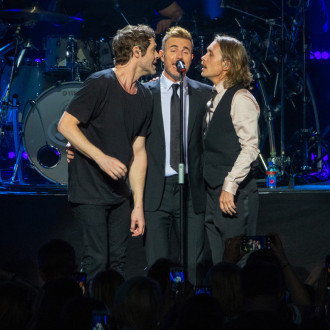 Gary Barlow says Take That are poised to return after he finishes promoting his upcoming solo album.

The 'Back For Good' group's frontman will release his first solo album in seven years, 'Music Played By Humans', on November 27.

But he's promised fans of the trio - completed by Mark Owen and Howard Donald - that they can expect them to make a comeback once he's wrapped work on his side project.

Gary is quoted by the Daily Star newspaper's Wired column as saying: "We've tour-album, tour-album since 2005 and everyone just wanted a little break.

"I'm a songwriter, so I want to feed that muscle all the time.

"Albums take one to two years, so that was my decision to fill time before the band get back together again."

Meanwhile, it was previously revealed that Robbie Williams has penned some new songs with his old bandmates.

The 'Giants' hitmakers reunited with the 'Angels' singer for a virtual Meerkat Music show in May, for the first time since 2018, and Robbie later shared that they were inspired to write new material for the band.

He said: "I've been writing some songs with Gary Barlow in the last few weeks, too.

"The songs I'm writing are more mature than what I usually do. Whatever I do and whoever I do it with it will be unexpected."