Stormi Webster has appeared on her first Vogue magazine cover alongside her mother Kylie Jenner. 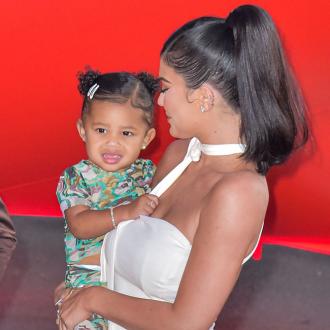 Stormi Webster has appeared on her first Vogue cover.

Kylie Jenner joins her two-year-old daughter - whom she has with rapper Travis Scott - on the cover of Vogue Czechoslovakia, which was shot on an iPhone at home amid the coronavirus pandemic.

The image is a close-up of the pair's faces with the text: ''Bedtime Story with Kylie Jenner & Stormi.''

The picture was shot by photographers Luca and Alessandro Morelli, who hosted a Zoom photo shoot with the pair.

Beauty mogul Kylie took to Instagram to share a behind the scenes shot of her and Stormi sharing a hug and kiss on Instagram, and she admitted in the caption that ''sometimes I just look at her and cry'' when she thinks about the tot growing up.

She wrote: ''i love this little baby so much i want to burst.. sometimes i just look at her and cry knowing she will never be this small ever again. who knew something so little could take up most of your heart God made no mistakes with you storm baby behind the scenes shooting @vogueczechoslovakia (sic)''

In the accompanying interview with the publication, Kylie opened up about whether she'll be letting Stormi wear makeup.

She admitted: ''The question is when it will be.

''When I was little, I secretly used my mother's shadows.

''It left me a lot of freedom and encouraged my creativity.

''From the sixth grade, I went with purple eye shadows.''

Stormi previously featured on the cover of Harper's Bazaar Arabia.

The Vogue interview comes after Kylie hailed her daughter as her ''remedy for everything''.

The 22-year-old 'Keeping Up with the Kardashians' star took to Instagram recently to share a sweet picture of them have a cuddle and admitted the tot always helps her to heal.

She captioned the photo of the pair: ''my remedy for everything.''