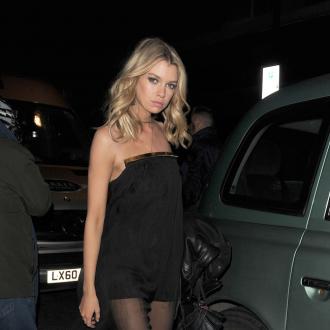 The Victoria's Secret beauty is rumoured to be dating Miley Cyrus and though she didn't name the 'Wrecking Ball' singer, she did confirm she is romantically involved with someone.

In a Q + A for V magazine, Stella said of her parents ''love a lot'', while for her siblings she answered ''Love, love, love a lot, too''

And as for her ''significant other'', the Belfast-born model replied '' Love sometimes''.

Though they haven't commented on their rumoured romance, Miley and 24-year-old Stella were spotted passionately kissing in a Hollywood carpark earlier this week.

Sporting a sequinned gold minidress and raunchy knee-high boots, the 22-year-old pop star threw her arms around the model while the stunning blonde cupped the 'We Can't Stop' hitmaker's bottom with one hand.

Stella, wearing a cropped denim jacket and black catsuit, held Miley by the waist with her other hand, and they were seen whispering to one another.

They both appeared aware they were being photographed as they looked directly towards the camera before dancing around the car park together.

Miley split from Patrick Schwarzenegger in March, and was previously engaged to Liam Hemsworth, and recently opened up about her experiences of dating both men and women.

She said: ''There are times in my life where I've had boyfriends or girlfriends. And there are times where I just love being with myself and don't want to give part of myself away to someone else ... I think that's a new freedom for women, especially.''