A look at the acts playing Splendour Festival 2016

Year after year, one thing you can guarantee is that Splendour will return with another great Line-up at Wollaton Park; much of it is thanks to the reputation that the DHP Family and Nottingham County Council have managed to accumulate since starting this one day festival back in 2008. 2016 is set to be another great day of live music.

Splendour manage to mix some of the, shall we say, older bands with the 'here and now' big artists followed up with some great upcoming talent, and it's not just about the music, Splendour also deliver a comedy stage and take pride in the fact that this is a great family friendly festival. Since its inception, Splendour has had a wide variety of acts headlining including: The Specials, Jake Bugg, Feeder, Paolo Nutini, Madness and Calvin Harris to name but a few.

Main Stage
As usual, the main stage will be home to a whole mix of talent from 80's legends to some of some of 2016's biggest pop acts. The Mighty Human League will be gracing us with their epic back catalogue and their set os sure to be made up of hit after hit. If that's not enough 80's action to give you your nostalgia fill then UB40 will be on hand too.

Ed Sheeran signing, Jamie Lawson (who has recently had a Number 1 album) will be performing on the Main Stage. The big coup for this one day festival has to be the Headline act Jess Glynne. Her UK tour is sold out and the only way fans are likely to see her is at a festivals and Splendour is the perfect, family friendly, festival to see her at. One to watch on this stage that you may let slip by is Nusic Competition winner - Super Furniture

Confetti Stage
So this stage is really one of those that is exactly what it says on the tin. The Confetti Stage is the one that is full of fun and party time anthem style bands that it could almost explode like a confetti cannon. Remember that crazy band The Darkness? They are here for a sing-a-long and good time. If that is not enough then enter 00's favourites The Fratellis who are sure to play their famous hit "Chelsea Dagger" which, ironically, is the celebration goal song played just down the road at Nottingham Forest's City Ground. If you fancy a bit of Punk Rock then check out Stiff Little Fingers, it's additions to the line-up like this that really add elements of diversity. Out of all the bands playing this stage, Nottingham's very own Eyre Llew are ones to watch; they follow in the footsteps of the likes of Dog Is Dead and Jake Bugg so you know that these guys are going to be great too.

Acoustic Stage
Will Varley is the main man who will be headlining the Acoustic Stage, he's already sold out the Bodega in Nottingham and I'm sure many will be intrigued to see him on the bigger stage. The Acoustic stage has some great talent playing over the course of the day which includes Tom McCarthy, Bruc-C and Ellie Keegan. You're sure to find something amazing that you might not go for normally.

Comedy Stage
Now during the day you might get to a point of "music overload" do not fear because Splendour 2016 has got it covered in the shape of their Comedy Stage. Relax, chill and laugh out loud!

With the likes of Edinburgh Fringe Festival regular Patrick Monahan set to perform, the audience is sure to have stomach pains from laughter. Not to forget Ivan Brackenbury, who has a comedy slot on Radio 2, it is clear that there will be something for everyone.

Tickets are less than £50 for Adults and, let's face it, you would be lucky to get change from that if you went to see the likes of The Human League or Jess Glynne on their own headline tours. Splendour look to have delivered a great line-up and soon it'll be time to see them all those additions in action. 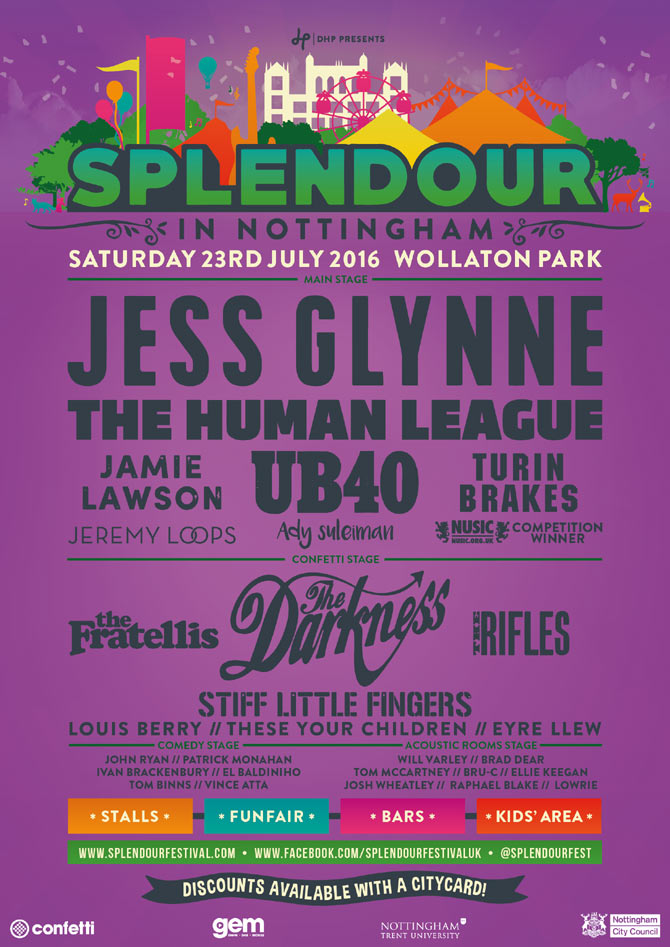