Sophie Mahon talks to us about "being canny with the Internet", collaborating with Bryan Ferry and drawing inspiration from Humphrey Bogart [EXCLUSIVE]

With dreams of working with Bryan Ferry, and Aston Martin aspirations, Sophie Mahon is aiming high with her expectations

Having drawn inspiration for her first album from the works of F Scott Fitzgerald (The Beautiful And The Damned) and Erin Morgenstern (Night Circus) Sophie Mahon has now used Film Noir and ABC's Lexicon Of Love as her touchstones for her second, Bogart’s Eyes. The new album, due out in October this year, follows Sophie's debut album Xenon Nights released in November last year. Mahon says that her new material has not only been inspired by the films of Humphrey Bogart but also by fellow movie icons Lauren Bacall and Cary Grant. With an unapologetically 80's referencing soundscape Sophie says that she "doesn't really fit in anywhere" but she has been building her fan base and says that it's "more than I ever expected when I started out a few years ago". Mahon has a busy schedule coming up now that lockdown restrictions have been eased. She's just released the lead single, In A Lonely Place, from her forthcoming album, has already played at the Primadonna Festival and has a support gig with The Wendy James Band on August 27th before she releases her second single in September and then the full album at the beginning of October. We caught up with Sophie to find out a little more about her influences and her plans for the future. 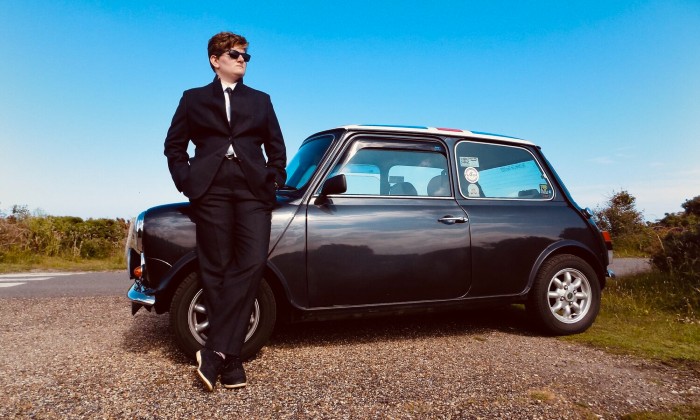 I would say it is 80s influenced New Wave/Art Rock, leaning towards the New Romantic. The Eighties runs through it pretty strongly with bits and pieces added to it, sometimes it’s more pop and sometimes it’s more rocky. I heard Bowie say in an interview that he is “eclectic, steals bits from all over the place and sort of [mashes them] up and sees what the end result is”. I guess I am the same.

I would say it is a challenge because of my genre, I don’t quite fit in anywhere really, so putting me on a lineup with other new bands I tend to stick out like a sore thumb. On the one hand that works very well, as I stand out and sound unique, but sometimes people just come for one sort of thing and don’t take much interest.

It’s also a challenge dealing with social media; boosting followers and promoting yourself, that all seems to mean too much to record labels and promoters these days, which is a shame. They don’t take you for your music, instead looking at how many followers you have and video views, but sometimes, like me, you can be rubbish at being canny with the Internet, so you fall flat on your face.

Ha! It is probably the most difficult you can get besides trying to be an actor. Again it’s the social media thing and just getting yourself out there, fighting against the waves of other people doing the exact same thing. The Internet did wonders for music but it has also opened the doors so wide that there’s so much out there, I don’t blame people finding it hard to find new music.

I am slowly building my name up around East Anglia, which is great and more than I ever expected when I started out a few years ago, so I have come a long way really. I would say networking, making friends with radio presenters and promoters is key; I know some wonderful people now, who support me every time I release something new. It feels better than when you throw your music into the abyss of the Internet, sometimes you hook something but not often.

Very. Music is a personal thing, to me anyway. I am quite shy and private so these songs come from behind the parapet as it were, so I am protective of them. Plus I need them to reflect me, it took me a long time to become this person, I am comfortable in this skin and don’t want people to get me wrong.

My heroes Bryan Ferry, David Bowie and Duran Duran have a lot of creative control over their work and it makes them sound and look unique. They control the image as well as the music, which is the important part to me - I create the artwork for all my music, I generally draw/paint them, and I decide how I want to dress, so I can reflect the music I am playing.

I draw a lot of inspiration from 80s music and style, classic 40s/50s films and style, books and art. My influences tend to lean towards escapism and romantic ideals. The 80s tend to inspire the sound, and the rest influence the idea and lyrics. My first album had a few songs inspired by books (F Scott Fitzgerald and Erin Morgenstern) and poems (William Blake) quite by chance, sometimes it’s just a title or a line that inspires a whole song. My next album is inspired by the films of the 40s actor and icon Humphrey Bogart. I aimed for it to be a Film Noir take on ABC’s The Lexicon Of Love, which is such a classic album. I wrote a song for each film I watched as I was discovering him. Again they took inspiration from a specific scene, a mood or a line, using them to build a feeling. I hope they reflect him as much as they reflect me.

Bryan Ferry, which will come as a surprise to no-one, he is my biggest influence and the reason I got into music. I would just love to see how he works behind the scenes and see how he views his songs, and the world in general to be honest. He has an interesting way of working, creating a collage with the music and I want to see how he gets to the end result. Plus he works with some of the world's greatest musicians so that’s an added bonus, there are so many I want to work with because of him. Even if I just sing one line, I don’t care, I love everything he has ever written so he can take all the credit!

I will also add in Nile Rodgers, which needs no explanation, he is an incredible musician and producer. I would love to see what he would do with my music. I also want to talk to him about his love of Roxy Music - he was influenced to start Chic after seeing Roxy in concert. If I could be in the same room as Nile and Bryan I will die happy.

I can name nearly every dog breed known to man. Before music and films, my biggest obsession was dogs, probably since I could talk. I read so many dog books and read them back to back, that I could watch Crufts and name all the breeds. Your brain is a sponge at that age, unfortunately I studied dogs more than I studied at school...I struggle with long division but I can tell you all about a Grand Basset Griffon Vendéen.

Yes I suppose I do. I want to explore different genres and mash them together, I hope I never create an album that sounds the same as the last. That’s quite a broad aim. I would work with all the musicians I have always wanted to work with too.

I would like to support some of my heroes on tour, again Bryan Ferry and Duran Duran being the main ones - almost as a way of saying thanks for all the inspiration rather than just to get a bigger audience. But that would help a lot.

I would like to get on Later with Jools Holland or the Hootenanny, I have watched it so many times and thought “one day that will be me”. There are always really creative, innovative musicians on there.

I would just hope to be an inspiring figure, if I get anywhere - to be to someone, what my heroes are to me. As well as Ferry and Bowie, I am influenced by people like Humphrey Bogart. Lauren Bacall and Cary Grant; just as people rather than actors, the same goes for Ferry and Bowie. They always conducted themselves in such a good way, whilst still being themselves, I think we need more figures like that these days. I would use my influence to help others/charities; you have reached where you want to be at that point so you might as well help others, life’s too short to be selfish. If I am remembered for being a kind person, who created some good music occasionally, then I will consider my job here done.

Also to own at least one Aston Martin would be nice too.

A bit further along than I was today.

It’s hard to say, really. Supporting slightly bigger bands, actually making a bit of money from it- rather than make a loss, to be played on BBC Introducing or BBC Radio 6Music and to get gigs further afield. As long as I am moving forward.

Good question. My first single In A Lonely Place, from my upcoming album Bogart’s Eyes, is out on 30th July. The Ready Mades and I have a gig at the Primadonna Festival that day too, 1500 in Stowmarket. After that we have a gig supporting The Wendy James Band (Transvision Vamp) on August 27th at the Norwich Arts Centre. Then the second single Bogart’s Eyes, complete with a stop-motion animation music video is out on 3rd September. And then, finally, the whole album Bogart’s Eyes will be out on 1st October!