Slowthai has confirmed plans to release his new album 'TYRON' - the follow up to 2019's debut LP 'Nothing Great About Britain' - early next year. 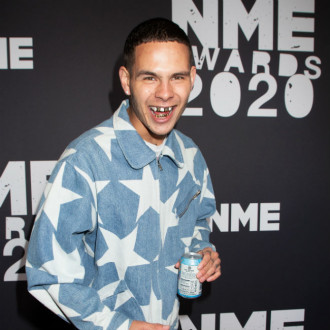 Slowthai will release his new album 'TYRON' early next year.

The rapper has confirmed plans for the follow-up to his 2019 debut LP 'Nothing Great About Britain' - which will drop on February 5, 2021 - and unveiled the video for his latest single 'NHS'.

In a statement about the record - which features guest spots from the likes of A$AP Rocky and Skepta - he said: "I am far from perfect, but I’ve learnt a lot about myself while creating this album and I will continue to grow into a better person for myself and aim to be a reflection of what I want to see in this world.

“I hope this album can be the light if you’re in the dark, and to know that you’re not alone.

"It’s OK to be yourself, f*** everything else. Learn, grow, aim to better than you were yesterday.”

Meanwhile, the video for 'NHS' sends up several aspects of the coronavirus pandemic, including one moment with slowthai - whose real name is Tyron Frampton - rapping out top of a tower of toilet rolls.

He tweeted: "I wrote this track as a reminder to always appreciate what you have whilst you have it.

As well as the new single, 'TYRON' will also feature his recent track 'Enemy', in which he references his controversial appearance at the NME Awards earlier this year.

He was criticised for making overtly sexual comments to the event's co-host Katherine Ryan when on stage at the ceremony in February and hugging her.

He then got into a verbal altercation with an audience member who called him a "misogynist" for his behaviour towards the comedienne as he collected his fan-voted Hero of the Year Award, which resulted in him jumping from the stage to confront the heckler.

Slowthai later took to Twitter to apologise to Katherine for his actions, an apology which she fully accepted.

On one verse on the new track, he spits: “F*** a fortune teller, I’m a force of nature/Have ups and downs like a elevator/I’m the instigator, you’re a non-disclosure/P*** tape and now I got a b***r.”